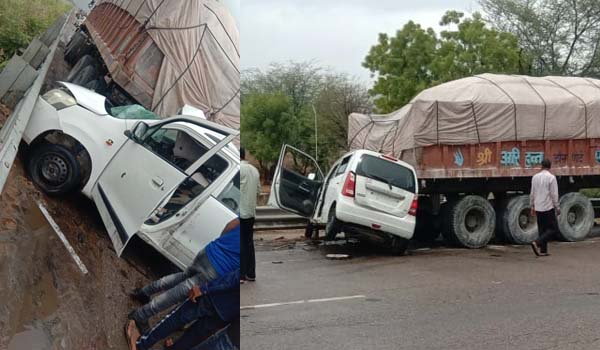 Road accident on Jaipur-Delhi national highway that caused death of three woman and left 2 others injured.

Jaipur: Three women were killed, while a child and a man were seriously injured when the car they were travelling in collided with a stationed truck on Jaipur-Delhi national highway in Harmara area of Jaipur on Sunday. The collision was so intense that the front portion of the car got stuck under the truck. A police team rushed the victims to a hospital where three women were declared brought dead.

The victims, residents of Daulatpura village, were members of a family. They were on their  way to Chandwaji from Jaipur when the mishap occurred near Bilochi flyover.

The truck was stationed on the roadside. “The car rammed into it. There were five people in the car. Three women died, while the car driver and a child were seriously injured. They belonged to the same family. The injured are undergoing treatment at hospital. Their condition is stated to be critical,” said a police officer.

A huge crowd of commuters and local residents gathered near the spot after the mishap. A police team rushed there after getting information from the local residents. The victims were taken to a hospital in an ambulance. The bodies were handed over to the family members after a post-mortem examination.

Many road accidents have been reported on Jaipur-Delhi national highway due to the trucks illegally parked on the roadside. The local residents have complained to the police and administration about this several times, but no action has been taken against the truck drivers.