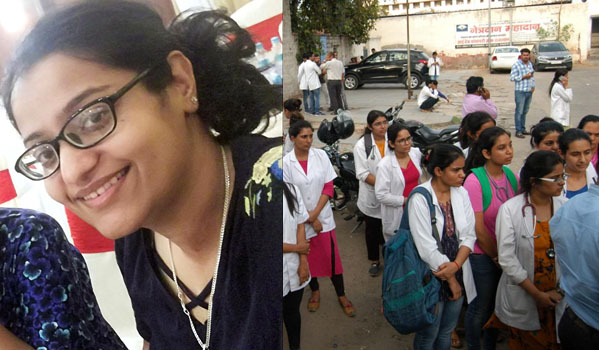 Jaipur: A day after Sakshi Gupta – a resident doctor at Sanganeri Gate Zanana Hospital, allegedly committed suicide by hanging herself, her family members accused five senior doctors of harassing her. The father has named five women doctors in the complaint registered with the police in this regard. He alleged that these doctors forced Sakshi to work for 12-24 hours a day. The police didn’t find any suicide note, sources said.

Sakshi, a resident of Fazilka in Punjab, had started her MS (gynaecology) two months ago and was working as a junior resident doctor at Sanganeri Gate Women Hospital. She got her MBBS degree from Guru Gobind Singh Medical College and Hospital in Faridkot of Punjab in 2017.

Sakshi used to complain about harassment by seniors when she spoke with her family members over phone, the father alleged.

“She called me on Tuesday and told me that she was scared. Her senior used to scold her and tell her to leave the job because she was useless. I told her to complain about it and also asked her if I should approach the medical college authorities. However, she said that it wouldn’t work and she would be harassed more if I complained. She stopped me from registering a formal complaint with the college authorities,” said the father.

A crowd of resident doctors gathered outside the mortuary where the post-mortem examination of the body was conducted. They demanded action against senior doctors who were harassing Sakshi.

Police officials said that the statements of Sakshi’s colleagues were being recorded and further investigation is going on.