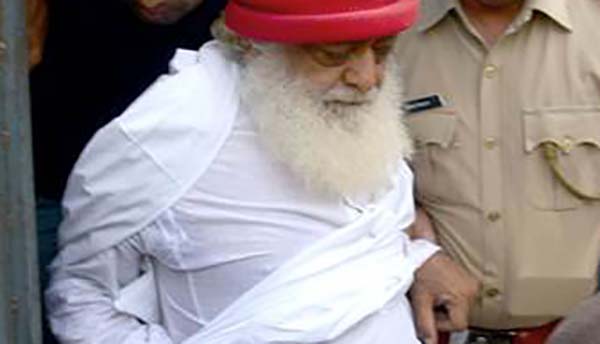 Jaipur: Almost a week after self-proclaimed godman Asaram Bapu was rushed to a hospital from Jodhpur central jail after testing positive for Covid-19, officials said that he was recovering from the infection. He is on an oxygen ventilator in ICU of Jodhpur AIIMS. With the oxygen saturation level above 90, Asaram Bapu is responding to the treatment and his condition is stable.

Asaram who is behind bars in a case of sexual harassment with a minor girl will recover from Covid-19 likely in 3-4 days, doctors said His condition is stable and he is breathing normally. He is in fact chatting up with hospital paramedics.

The Jodhpur central jail administration had taken samples to test prisons lodged there. Asaram tested positive along with some other inmates. He was quarantined in the jail but was admitted to Mahatma Gandhi Hospital when the oxygen saturation level came down. He was admitted to AIIMS two days later as many supporters gathered outside Mahatma Gandhi Hospital defying lockdown guidelines. He was shifted for security reasons, officials said.

Asaram Bapu was arrested in 2013 for sexually harassing a minor girl. He was sentenced to life imprisonment in the case three years ago. He is lodged in Jodhpur Jail since 2013. Recently, he has filed a petition in the Rajasthan High Court seeking interim bail of two months to treat his other ailments with the Ayurveda method. On his plea, the High Court has sought a medical report from AIIMS. The petition will now be heard on Thursday.