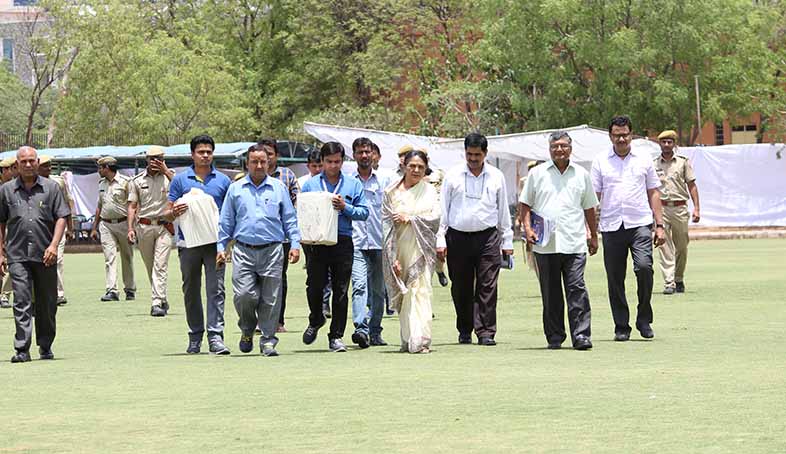 Jaipur: Thirty-three district associations took part in the voting on Monday to elect office bearers of Rajasthan Cricket Association (RCA). After Rajasthan high court’s order to conduct the elections, no new last-minute controversy came to the light and the polling went off peacefully. The results may be announced on Tuesday with the high court’s consent. All eyes are now on the results which experts said might be quite surprising. The possibility of cross voting is not being ruled out. Justice Gyan Sudha Mishra who was appointed the ombudsman for the elections, requested the High Court to keep the ballot boxes in its custody. The court, however, asked the Ombudsman to take care of the security. The boxes were later kept in the government treasury. It may give both the sides a reason to move court against the results. Former IPL commissioner Lalit Modi’s son Ruchir Modi and senior Congress leader CP Joshi are pitted against each-other for the top post. Modi group claimed that they were getting at least 19 votes, while Joshi group said they would get 18 votes. All office bearers of 33 district associations participated in the voting. Ramesh Gupta, who is secretary of Baran district association, was the first to cast his vote. The vote of the secretary of Bharatpur district association had been discounted, but after intervention of Lokpal Gyansudha Mishra on directions from the high, his vote was counted. Sources said the results would be unexpected as cross-voting was possible. MP Harshvardhan Singh had jumped into the fray at the last minute on Friday. It is believed he filed the nomination in support of the Modi camp. Mahmood Abdi was also from Modi group. Both withdraw their nomination on Monday. From CP Joshi group, only Rampal Sharma had filed the nomination. He too withdrew his claim for the top post. Now the fight will be between Lalit Modi’s young son Ruchir Modi and CP Joshi. Note: Want to share this story with someone? Just click on the WhatsApp or Facebook icon below:
Follow @ThePinkcityPost