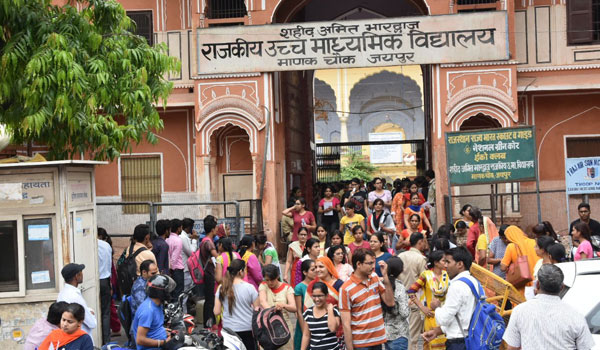 Candidates leaving from center, after the RAS prelims 2018 exam.

Jaipur: Only 75% of enrolled candidates appeared for the RAS prelim 2018 exam that was conducted on Sunday. Out of 5 lakh enrolled candidates, nearly 3, 76,762 candidates appeared in the exam on Sunday across 1454 centers in Rajasthan. According to the candidates, questions mostly on current affairs and government schemes were there in the question paper and other questions on the meeting of American President Donald Trump and North Korean President Kim Jong-un, Rajasthan’s Mega food Park, Electoral bond scheme; Kanya Van Samruddhi Yojna, etc were asked. For most of the candidates, the exam paper was easy. In Jaipur, out of 1, 29,563 enrolled students, about 1, 01,563 appeared for the exam. Even after several guidelines by the department, many candidates appeared for the exam wearing watches, jewellery, socks, earphones, sunglasses etc and were unable to find a place to keep them safe before entering in the exam hall. None of these things were allowed during the exam, as per RPSC (Rajasthan Public Service Commission) guidelines. Exam center employees at many places made candidates pay Rs 50 for keeping their belongings safe and returning them after the exam. Candidates reached the exam centers before the scheduled time and the exam started at 10 AM sharp. All the police officials, administrations employees, and staff verified and checked each one of the candidates before allowing them to appear in the exam. Many of the candidates from other states complained about the question paper. They said that most of the questions were based on Rajasthan. What they prepared for the exams was different from what has appeared in the question paper. A candidate in Jhotwara took away his OMR sheet. This created panic among invigilators and officials. A FIR has been lodged against the student and police is looking into the matter. In another incident, a female candidate wearing a necklace (Mangal Sutra) was stopped from entering the examination hall. She refused to remove it and left the examination center without giving the exam.
Follow @ThePinkcityPost
Click on the following link(s) to find the latest & related stories on: RAS 2018 > RAS prelims exam 2018 stats