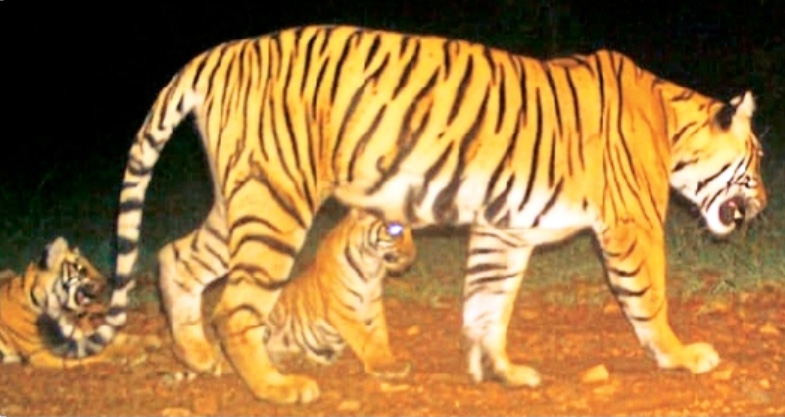 Jaipur: A Ranthambore tigress – known as T-105 – has littered three cubs. She was caught on a trap camera with the cubs near the Sultanpur area of Ranthambore national park in Sawaimadhopur district. The tigress and cubs have been put under surveillance and security has been stepped up in the area. This has come as great news for wildlife lovers.

Tigress T-105 is about 5-year-old. These cubs are her first litter. They are already about 4 months old. T-105 is the daughter of the famous Ranthambore tigress Noor, also known as T-39. T-105’s sister T-106 was relocated to Mukundra Hills where she died. T-105 is often spotted by tourists in tiger safari zones – 1 and 2 in Ranthambore.

A senior Ranthambore tiger reserve official said the tigress was spotted in the Tapkan Ka Nullah area. “We caught her on a trap camera. A team of rangers has been asked to keep a tab. The tigress and the cubs are under constant monitoring,” said the official.

There are now 84 tigers in Ranthambore. In the tiger reserve area, there are 20 are male tigers, 30 tigresses and 24 cubs. In the Keoladeo reserve adjoining Ranthambore, there are 10 tigers.