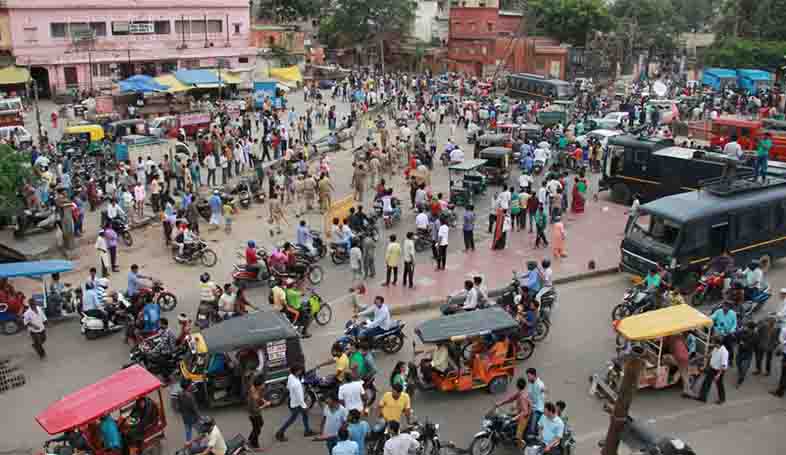 Jaipur: The curfew in Jaipur, clamped following the Friday night clashes between police and people, was relaxed for two hours on Monday. People in large numbers ventured out of their homes to buy grocery and other necessary things.

Two men were killed in the city’s Ramganj area when police opened fire on a mob after it went on a rampage setting ablaze several vehicles and a power house. These incidents occurred after a couple was allegedly assaulted by a constable. Update: Two men – not one – were killed, police reveal 3 days after Ramganj violence

The police will make an assessment of the situation on Tuesday morning and decide whether to continue with the curfew or lift it completely.

According to Jaipur police commissioner Sanjay Agarwal, the curfew was eased for 2 hours from 3.30 pm to 5.30 pm on Monday. This was done in the four affected areas – Manak Chowk, Subhas Chowk, Galta Gate and Ramganj. The residents of these areas could also breathe a sigh of relief as the situation appeared to be returning to normalcy. People were able to move freely and buy necessary things for their house.

On Sunday, the district administration had lifted the ban on mobile internet services from 50 out of 64 police. The body of 22-year old man, named Adil, was buried after the post-mortem on Monday. Reportedly, hundreds of people took part in the last rites of the deceased man.

This incident occurred when a policeman allegedly tried to stop a motorcycle in Ramganj when the rider tried to escape.  The official though managed to hit the pillion rider, who was taken to a police station. Soon after this hundreds of people gathered at the police station. The police tried to pacify them but to no avail. The violent mob damaged two dozen vehicles and set ablaze four others, including an ambulance and police bus. The mob also torched a power sub-station. The police, as a preventive measure, had fired in the air to control the violent mob.

“It was an unfortunate incident but the situation is under control. We have full proof that the police behaved properly that day,” commissioner Agarwal was quoted as saying. While the news of the curfew being lifted is a welcome relief, residents of the areas affected will be hoping for peace to continue and the dispute between the man’s family and police to be resolved at the earliest.

Two men – not one – were killed, police reveal 3 days after Ramganj violence