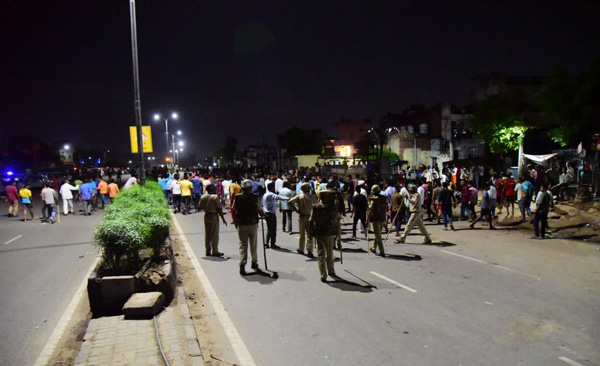 Jaipur: The administration snapped the mobile internet services on Monday morning keeping in view the communal tension in Ramganj and other nearby areas. The internet services were banned in community sensitive police station areas of the city temporality.

The tension was triggered after some anti-social elements hurled stones on a bus on its way to Hardwar. People from a community started sloganeering, causing people from the other community to engage in an argument.

The tension escalated around 10 pm when some people damaged over 10 buses by hurling stones. About 20 people were injured in stone pelting and subsequent clashes. At least seven policemen were injured. The police had to fire tear gas and use force to disperse the crowd. Heavy police force was deployed in Ramganj, Transport Nagar and Galta Gate areas.

The administration imposed a ban on internet services in 10 police station areas of the city on Monday morning.

A minor clash had taken place between the people of two communities after some pilgrims were attacked in Ramganj area on Sunday. The tension prevailed in the area on Monday, but no untoward incident was reported as people were busying celebrating Bakrid and the last money of Shravan month.

The tension escalated in the evening when people gathered at some places in Ramganj and Khole Ke Hanuman Ji Chauraha.

“We have deployed heavy police force to keep a tab on the law and order situation. The situation is under control; however, we have decided to ban the internet services to prevent the spread of rumours,” said a police officer.