Ramayana and Mahabharata should be taught in schools, says Shashi Tharoor at JLF

Home » Culture & Events » Ramayana and Mahabharata should be taught in schools, says Shashi Tharoor at JLF 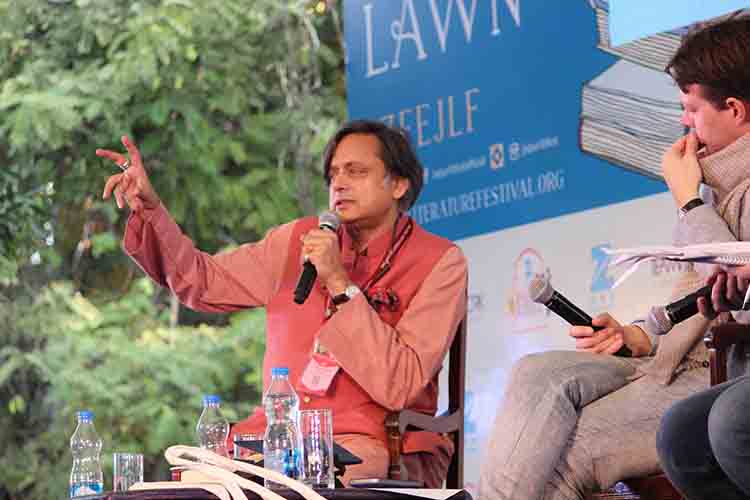 Tharoor was in conversation with historian John Wilson and publisher Michael Dwyer at a session on ‘Remembering the Raj’ at Jaipur Literature Festival on Sunday. Image credit: Post staff

Jaipur: Member of Parliament (MP) Shashi Tharoor believes the Ramayana and the Mahabharata should be taught in schools.

While speaking at Jaipur Literature Festival – 2017, Tharoor said children should get the opportunity to read these two epics just like they read the Iliad and the Odyssey in schools. Tharoor, however, said that people should not attempt to inject a political ideology into our education system.

“The Ramayana and the Mahabharata have been an integral part of our civilization. Children should read them in schools,” Tharoor said.

“Our children should read Shakespeare, but they should also read Kalidasa,” he added.

Tharoor was in conversation with historian John Wilson and publisher Michael Dwyer at a session on ‘Remembering the Raj’. The panel delved into Tharoor’s recent book, ‘An Era of Darkness: The British Empire in India’.

He accused the British empire of reducing India – that was once very prosperous – to the poorest country in the world during their 200 years of rule.

“During the British Raj, India was the easiest place in the world for an untalented Englishman to thrive.

“Over 35 million Indians died unnecessary deaths because of British policy and (Winston) Churchill, who is often held up as a democratic ideal by the apologists of the Empire, was on record denying financial assistance to starving Bengalis during the Great Bengal Famine. In fact, the famine camps were given less provision than those in the Buchenwald concentration camp,” he said. He, however, said that it was important to forgive “what we went through but equally important not to forget it”.

“It’s the easiest to pay lip-service to the Mahatma. BJP MP Sakshi Maharaj is an example who called for building of statues of Nathuram Godse even as the government is co-opting Gandhi as a symbol in most spheres of political and social life,” he said at a session at the Jaipur Literature Festival (JLF) here.