Rajsamand: Body of Parvej Kathat – martyred in Kashmir – to be consigned to flames today

Parvej lost his life in a ceasefire violation by Pakistan at Line of Control (LoC) in Kashmir in the wee hours of Thursday.

Home » State » Rajsamand: Body of Parvej Kathat – martyred in Kashmir – to be consigned to flames today 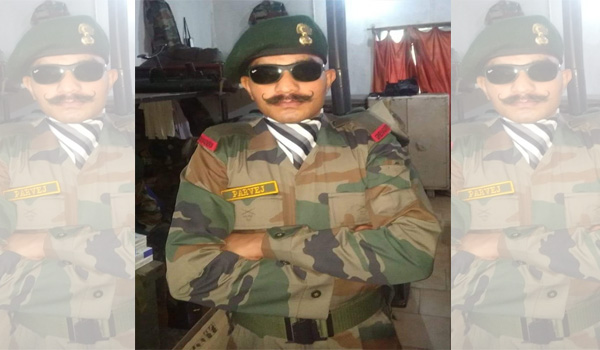 Jaipur: Hundreds of people have reached Shekhawas village in Rajsamand district to pay homage to army jawan Parvej Kathat who was martyred at LoC in Kashmir.

The family members were informed about his martyrdom on Thursday morning. Grief gripped the area as the news of his death spread in the village situated in Bhim tehsil of the district.

Parvej Kathat (29) was posted as Sniper Firearm in 5 Grenadier in Kashmir. He joined the Indian army on November 16 in 2009. Parvej’s brother Iqbal is also posted in 16 grenadiers. Most of his family members are serving in the army.

Parvej was killed in a ceasefire violation by Pakistan at Line of Control (LoC) in Kashmir in the wee hours of Thursday.

As per the relatives, Parvej’s father is an ex-army man. Following in the footsteps of his father, Parvej wanted to join the army since his childhood days.

His wife Shenaaz is yet to come to the terms with the tragedy. Parvej’s father said that he last spoke to his son on Tuesday. Parvez informed that he would soon be in the Uri sector where there will be no network connectivity. He said he would return soon.

Parvej’s body will be brought to his native village on Friday.

The last rites of 21-year-old martyr Grenadier Hari Bhakar who was killed in a ceasefire violation along the LoC in Jammu and Kashmir by Pakistani troops were performed at his native village Joosari near Makarana in Nagaur district of Rajasthan on March 25.

Thousands of people reached the village to pay tribute to the braveheart.