The two victims were returning home after visiting a hospital with their husband when the fire occurred. 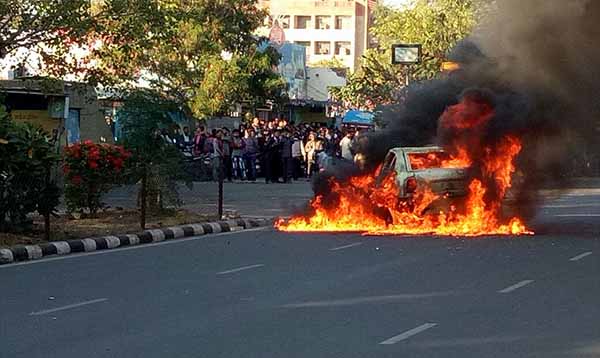 Jaipur: Two women were burnt alive when the car they were travelling in caught fire in Jalore district of Rajasthan on Tuesday evening. The two were returning home after visiting a hospital with their husband when the mishap occurred.

Deeparam Prajapati, a native of Sesava village in Jalore, had two wives. One of them had a prolonged illness, so with her consent, he married another woman. They were identified as Malu Devi and Dariya Devi.

He took one of them to hospital to visit a doctor on a scheduled appointment. The other wife was also accompanying them.

When he was returning home from the hospital, the car suddenly caught fire. He got off the car and tried to open the door of the passenger seats, but the fire engulfed the vehicle within seconds. The two women couldn’t get out of the car and were burnt alive.

When locals saw the car in fire, they tried to douse it by pouring water from a water tank, but it was too late by the time the fire was controlled. The women had been charged to death.

Another incident of car catching fire had created panic on JLN Marg in Jaipur recently.

The owner and his friend had gone to Saras Parlor to buy ice-creams and when they returned, they were shocked to see the car going up in flames. Passers-by informed the police control room following which fire tenders were rushed to the spot.