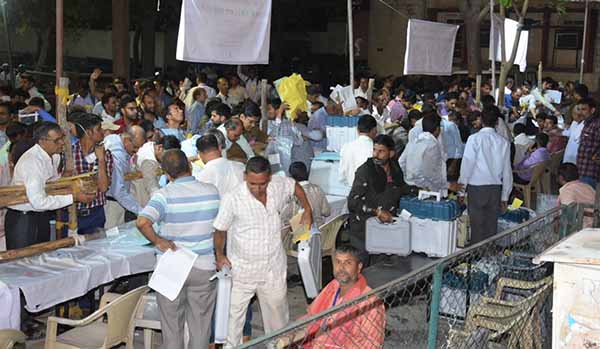 Polling parties after voting for the Lok Sabha elections in Jaipur.

EVM malfunctioning was reported at many polling booths in Rajasthan. Senior election department officials said that the EVMs were replaced within half an hour at these places. At a polling booth in Lalkothi, BJP MP Ramcharan Bohara and BJP leader Ashok Parnami allegedly caught some people casting bogus votes. Both the leaders reached the Lalkothi police station to register a complaint.

The voting went off peacefully in all the 12 constituencies of the state. There were 23,783 polling booths. A total of 134 candidates were in the fray including 12 of the Congress and 11 of the BJP.

In the first phase, the voting percentage was 68.22.