Rajasthan: RCA elections turn into a direct fight between BJP and Congress 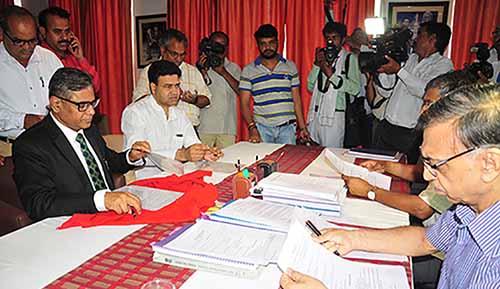 Jaipur: Rajasthan Cricket Association (RCA) elections will now be a direct fight between BJP and Congress.

Until now only two strong candidates – senior Congress leader CP Joshi and Ruchir Modi, the son of former IPL commissioner Lalit Modi – were tipped to fight for the top post, but the equations changed on Friday when BJP fielded MP Harshvardhan Singh, on the last date of filing nominations.

Nomination papers were submitted by Harshvardhan barley 15 minutes before the deadline of filing nominations.

Sources said that the BJP decided to field its candidate because many district cricket associations which were earlier in favour of Ruchir Modi had switched camp and were supporting Joshi.

The last day for withdrawing nomination is May 28, so equations may still change, sources said.

The elections are scheduled to take place on May 29.

Some others who have filed nomination include Mahmood Abdi and Rampal Sharma.

Rajasthan high court had earlier this month asked RCA to conduct elections within the next three weeks.

A fraction of the Rajasthan Cricket Association (RCA) had called off the elections when registrar of cooperative societies returned the RCA’s amended constitution, but the court rejected this order and directed that the polls be conducted under the supervision of an IAS officer.

The order has come as a setback to former IPL boss Lalit Modi as it was widely believed that the group that was supporting him was behind calling off the elections. It was being alleged that the elections were called off when senior Congress leader CP Joshi jumped into the fray and decided to fight for the top post against Modi’s son Ruchir Modi.