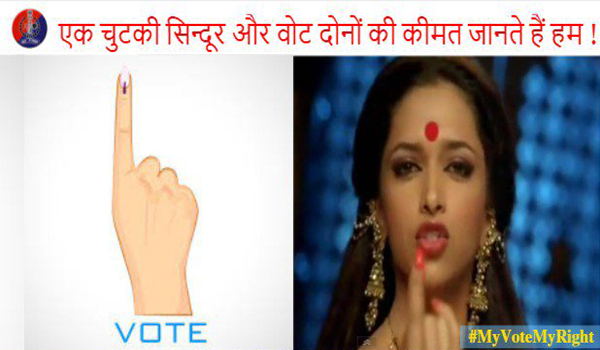 Jaipur: While Deepika Padukone and Ranveer are hogging headlines in the country after they tied the knot, the Rajasthan police is trying to utilize the buzz created by the wedding for a noble cause. The cops here took to Twitter and used a famous dialogue of Deepika Padukone to raise awareness about voting.

The social media team of Rajasthan police uploaded a tweet on their official Twitter handle in which they have used Bollywood’s actress Deepika Padukone’s photograph from the film ‘Om Shanti Om’ and the dialogue ‘Ek chutki Sindoor ki kimat, tum kya jaano Ramesh Babu’ to raise awareness about voting.

Read also: Jaipur police’s WhatsApp number for women in distress: All you should know 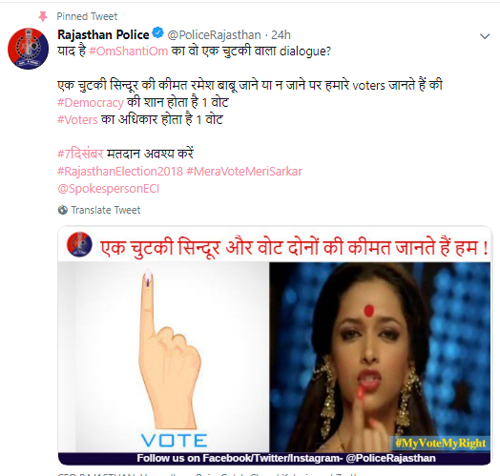 The post is gaining popularity among social media users. Elections and DeepVeer wedding are the two most trending topics in the country. Deepika may not even know that she is a part of this innovative campaign in Rajasthan.

This isn’t the first time that Rajasthan Police has given their tweets an innovative twist. They shared an important message on cyber security with a Thugs of Hindostan movie poster just a few days ago. 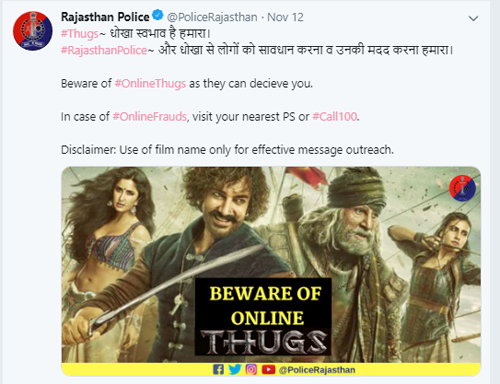 The Rajasthan police joined the social platform ‘Twitter’ in September 2017. They have gained many followers since then by their innovative and creative approach to aware people. They are keeping up with youth social media culture of the state. They share important messages by using trending memes and movies among the people on social media.