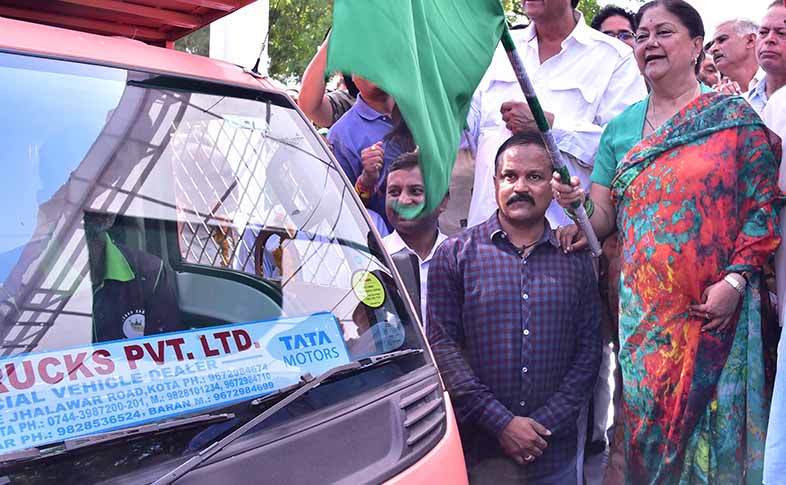 Jaipur: On the occasion of World Food Day on Monday, Chief Minister Vasundhara Raje inaugurated the second phase of the Annapurna Kitchen Scheme from Ajmer to provide affordable food to the poor and needy. She did so by this scheme by feeding women of Valmiki and Muslim communities at Vijayalakshmi Park. She also flagged off 51 smart mobile kitchen vans and sent them to different cities.

The CM announced that by December 13, 500 such vans will provide breakfast for Rs 5 and lunch and dinner for Rs 8 in all 191 local bodies in the state. Until now the food was distributed through normal vans however now will be done through the smart vans to ensure better service. Raje said that in order to provide nutritious food to the needy, the state has implemented this unique scheme, the first of its kind in the country, which is also being implemented now in Haryana, Madhya Pradesh, Gujarat, Maharashtra, and Karnataka.

Most of the work in this project will be done with the help of machines so that the purity and quality of the food are maintained. The process of making and distributing the food as well as for encouraging feedback has been made available online. The person eating food distributed by such mobile vans will be able to give feedback about the quality of food and related services through video conferencing. The vans will be connected to the GPS system hence its location will be known real time.

The CM stated that the government had made a provision of Rs 35 crores for this scheme and also appealed to institutions, donors, and the common public to contribute to the functioning of this scheme. She explained that donations can be made online and entire information about the amount spent on food will be available on the mobile van as well as at the office of the local body.