On Monday, Kalicharan Saraf snapped Bhima Bhai when the latter allegedly insisted on the transfer of someone in the health department. 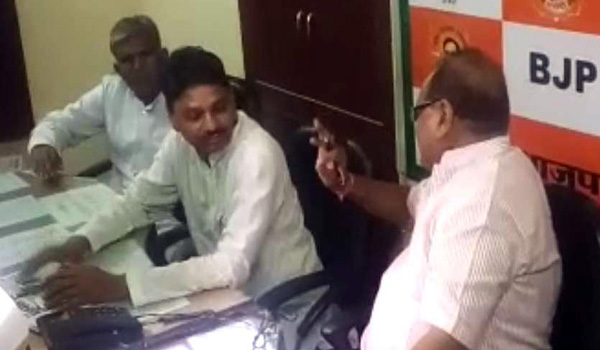 Kalicharan Saraf gets into a heated exchange of works with BJP MLA Bhima Bhai over transfers.

Jaipur: The BJP government’s minister Kalicharan Saraf on Monday got into a heated exchange of words with BJP MLA, Bhima Bhai, at a jansunwai (Public Grievances Redressal) meeting at the party’s state headquarters on Monday. The alleged fight took place over recommendation of transfers made by Kushalgarh MLA Bhima Bhai. Many media persons and a crowd of people were present when Saraf snapped the MLA and started quarreling with him.

On Monday, Kalicharan Saraf snapped Bhima Bhai when the latter allegedly insisted on the transfer of someone in the health department.

“Pahle janta ki sune ya aapki (Should I first listen to people or you),” agitated Saraf snapped Bhima Bhai in front of people, party workers and media persons. Both started exchanging heated arguments. There were reports that Kalicharan Saraf asked Bhima Bhai to leave the room.

When some people realized that there were media persons with their cameras, they warned the two politicians and asked the media persons too to leave.

It is for the second time in less than one month that two MLAs got into a fight publically over transfers. minister Earlier, minister of state for medical and health Banshidhar Bajia and education minister Vasudev Devnani locked horns over transfer of teachers at the latter’s residence in Jaipur on June 29.