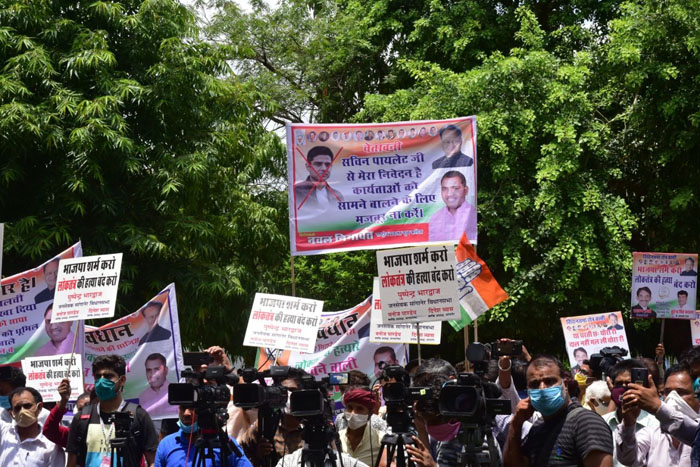 Jaipur: The Congress party workers held demonstrations at all district headquarters against the BJP, accusing the saffron party of being involved in a conspiracy to topple the democratically elected government.

Pradesh Congress President Govind Singh Dotasara had declared a state-level agitation against the BJP in a press conference on Friday. He also appealed to the workers to abide by the COVID-19 guidelines and maintain social distancing when protesting. He said that the number of protestors shouldn’t be more than 50 in a gathering; however, this was flouted during the protests on Saturday.

Protests were held in Jaipur in which workers accused the BJP of the conspiracy to topple the Ashok Gehlot government. They said that the government was democratically elected by the people of the state, but the BJP is killing democratic values due to tis hunger for power.

Meanwhile, a delegation of 13 members of the BJP met Rajasthan governor Kalraj Mishra. The BJP leaders claimed that the delegation was to discuss the COVID-19 situation in the state. After the meeting, BJP state president Satish Poonia said the chief minister himself is issuing threats that 8 crore people of Rajasthan would surround the governor house.

“These types of statements from the chief minister are disgraceful and illegal. The statement itself can land him in legal troubles under section 124 of IPC,” said Poonia. The leader of opposition Gulab Chand Kataria said that chief minister is issuing irresponsible statements.

“He (Gehlot) is saying that he would not be responsible for any law and order situation. How can the chief minister issue such statements? He should resign for this statement,” said Kataria.