Rajasthan government to recommend a CBI probe into Anandpal encounter 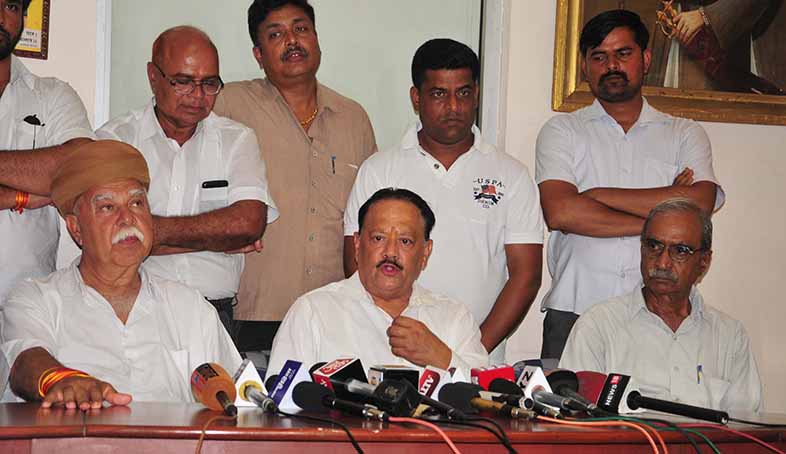 Jaipur: The Rajasthan government has agreed to recommend a CBI probe into the police encounter of Anandpal Singh. Home minister Gulab Chand Kataria announced the decision after a meeting with Rajput community leaders on Tuesday. BJP state president Ashok Parnami and panchayati Raj minister Rajendra Singh Rathore were also present in the meeting. The Rajput leaders announced to withdraw the agitation after the meeting.

A delegation of Rajput community leaders including Girraj Singh Lotwada, Lokendra Singh Kalavi and Mahaveer Singh Sarvadi met the home minister at state secretariat on Tuesday. They put forward their demands, seven of which were accepted by the government, according a joint statement released by these leaders.

Some other demands which were accepted by the government are:

Gulab Chand Kataria had earlier refused to send a recommendation for CBI probe, saying that it would affect the morale of the policemen who were involved in the encounter. He had said that Anandpal was killed in a justifiable police encounter. He was asked many times to surrender, but when he opened fire, the police retaliated.

One man was killed while more than 32 others, most of them, policemen were injured in clashes between police and Rajput community members at Sanvrad village on July 12. People who were protesting demanding a CBI probe into the encounter went on rampage. They beat up policemen, uprooted railway tracks and even attempted to torch a train, police officials said.

Several Rajput community leaders were booked for inciting the mob and other crimes after the violence.

Anandpal Singh was killed in a police encounter in Malasar village of Churu district on June 24.

Related story: Mistaken identity: Man who was killed in Anandpal Singh’s village was a Rajput