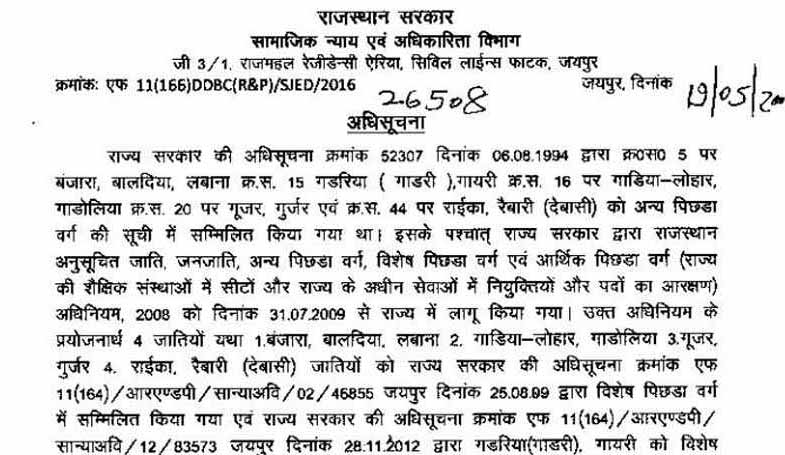 Notification issued by the Rajasthan government that moves Gujjars and 10 other castes back to OBC category.

Jaipur: The Rajasthan Government on Friday issued a notification re-including eleven castes, including Gujjars -  who have been demanding separate reservation in government jobs for over a decade- in their original category of Other Backward Classes (OBC). The other castes are Baldiya, Gardiya, Banjara, Labana, Gardia-Lohar, Gaayari, Raika, Gadoliya, Goojar, and Raibari. The notification was issued by the Rajasthan government’s social justice and empowerment department on Friday. The notification says that these castes would be considered in the OBC category with effect from December 9, 2016. The government has basically withdrawn its earlier notification that included these castes in the special backward classes (SBC). Senior officials said that the order was in compliance with the Supreme Court’s decision that directed the government to keep these castes in the OBC category. It has come as a major setback to the Gujjars just a couple of days after the community leader Kirori Singh Bainsala met Rajasthan chief minister Vasundhara Raje during her Karauli visit. After several violent protests by Gujjar community in Rajasthan, the government had included these castes in the SCB. But since it took the total reservation for Rajasthan government jobs to more than 50%, the Rajasthan high court struck down the quota, terming it unconstitutional. Gujjars now want the 5% SBC quota within the 50% limit, while the state government says to would get the Supreme Court's nod for more than 50% reservation as allowed in states like Tamil Nadu. After the SBC quota was rejected following the Rajasthan high court, candidates from these communities were unable to get jobs in different government departments even after being selected. The state government filed a special leave petition (SLP) before the Supreme Court but failed to get a stay order on the high court's judgment. The SLP is still pending before the apex court and the state government clarified that the notification issued on Friday would remain subject to outcome of the appeal there. Note: Want to share this story with someone? Just click on the WhatsApp or Facebook icon below:
Follow @ThePinkcityPost