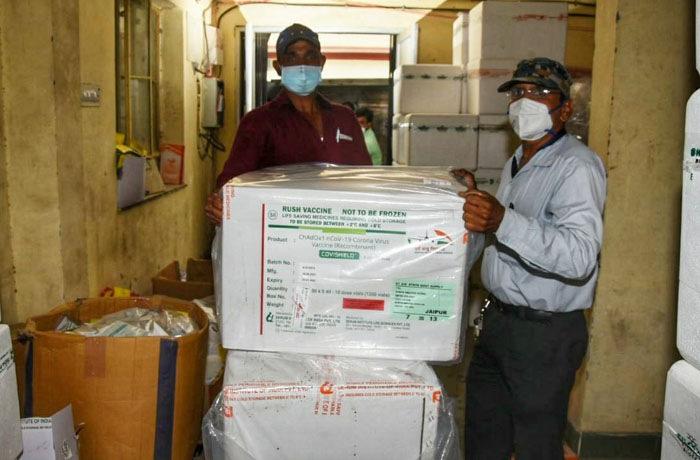 Jaipur: Rajasthan received 5.39 lakh vials of Covidshield, in a big relief to people who are due for their second dose of vaccines in July. The vaccination program came to a complete half in most parts of the state over the past few days due to the shortage of supply. The vaccines have arrived in Jaipur and currently being transported to other districts. The vaccination drive is expected to resume on Saturday.

Some districts including Banswara, Barmer, Bhilwara, Bundi, Chittorgarh, Dholpur, Hanumangarh, Kota, and Pratapgarh had to shut down all the vaccination centres due to the non-availability of the vaccines. On Friday, about 57 lakh doses were available in 23 districts of the state.

In Jaipur, only 80 centres were open. A medical and health department officer said that at most centres in the city, the preference is being given to those due for the second dose, but the first dose is being administered at some of the centres.

“The fresh batch of vaccines will help revive the vaccination program. The vaccines arrived in Jaipur late on Thursday, so the vaccination has already resumed at most of the centres in the city and nearby areas. In remote districts such as Jaisalmer, Barmer, Ganganagar, Sirohi, Jalore, Jhalawara, it will likely resume on Saturday as the doses are being transported by road. It will take us 8-12 hours to transport the vaccines to these districts,” said the officer.

The Rajasthan government has asked the central government to increase the supply as over 75 lakh people are due for the second dose in July.