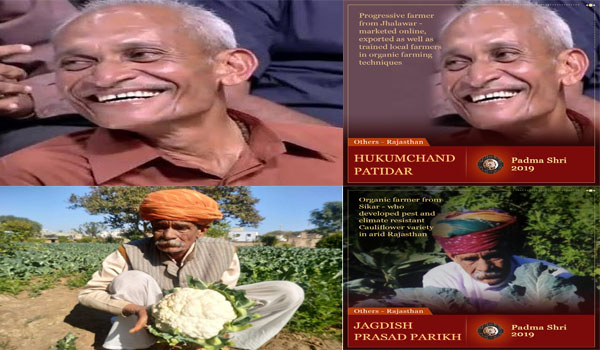 The duo was among the 94 inspiring personalities of the country selected for Padma Shri awards 2019.

Seventy-year-old Jagdish Parikh, a resident of Ajitgarh in Sikar district is a well-known personality in the field of agriculture. He entered the Limca Book of Records for cultivating one of the largest cauliflowers in the world – The Ajitgarh Variety- weigh 25.5 kg through organic techniques at his farm.

Parikh is recipient of the 1st National Grassroots Innovation Awards (2001) for his innovation “Ajitgarh Selection – a new Cauliflower variety of 15 kg”.

He received several awards for his agro-innovations through traditional methods in the past. In 2017, he received an IPR (Intellectual Property Rights) for his high-yielding and pest-resistant innovative crops.

Also, his life story was featured in Satyamev Jayate show of Star Plus channel. He started organic farming in 2004 and did several experiments and innovations on the crops using traditional methods.

His organic farming is spread over an area of 40 acres and provides organic products to seven countries of the world including Australia, Japan, New Zealand, Germany, France and Korea.

According to both the farmers, they faced several problems in terms of cultivation, the lack of funds, land and technology but they were adamant not to use chemical fertilizers for their crop. After a lot of struggle, they succeeded in cultivating some of the longest and heaviest vegetables through traditional methods.

Earlier in January, the ministry of home affairs announced 112 names as the recipients of Padma awards 2019. Of them, 56 are awarded on Monday and the rest will be awarded at another ceremony on March 16.

Padma Awards – one of the highest civilian Awards of the country, are conferred in three categories, namely, Padma Vibhushan, Padma Bhushan and Padma Shri.

The 2019 list comprises of 4 Padma Vibhushan, 14 Padma Bhushan and 94 Padma Shri Awards. Of them, 21 of the awardees are women, 11 persons from the category of Foreigners/NRI/PIO/OCI, three Posthumous awardees and one transgender person.

Subscribe to WhatsApp updates for Jaipur News Click on the following link(s) to find the latest & related stories on: Padma Awards 2019