The FIR has been lodged at Bani Park police station of Jaipur by the returning office through fax. A video clip of Ahuja distributing money in his rally has been submitted to the police as evidence. 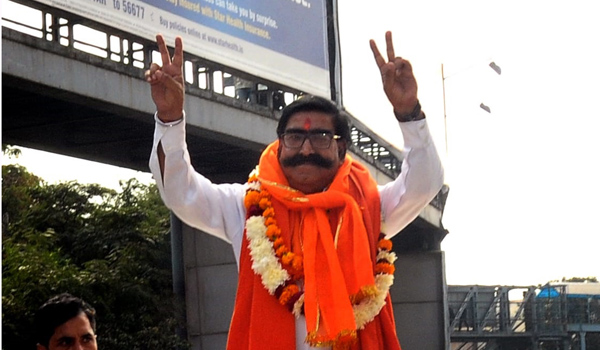 Jaipur: A case has been registered against Independent candidate from Sanganer constituency in Jaipur, Gyandev Ahuja at the Bani Park Police station on Monday for distributing money when he filed his nomination papers. Gyan Dev Ahuja is a former BJP MLA from Ramgarh and quit the BJP on Sunday after being denied the ticket to contest Rajasthan polls 2018.

Read also: BJP, Congress to engage in interesting fight in Tonk and Jhalrapatan: Raje Vs Manvendra and Yunus Khan Vs Sachin Pilot

The FIR has been lodged with the Bani Park police station of Jaipur by the returning office through fax. A video clip of Ahuja distributing money in his rally has been submitted to the police as evidence.
According to the report, Gyandev Ahuja was allegedly caught on camera distributing money in his rally on Monday. He was heading to the returning officer’s office to file the nomination from Sanganer assembly as an independent candidate.

Read also: Jaipur’s election battle: All you need to know about who is pitted against whom

In the defence, Gyandev Ahuja said that the money was distributed to the band team for playing Dhol during the rally. They are not even their voters. He said that he would submit evidence in this regard to the police.

Distributing money or giving gifts to voters during the elections is considered as the violation of Model Code of Conduct. Further investigation is going on.

The BJP denied him the ticket and gave the ticket to Ashok Lahoty. Disappointed by the decision, Gyandev Ahuja left the BJP and decided to fight the election as an independent candidate from Sanganer assembly of Jaipur on Sunday.