As the battle lines are now clearly drawn, a lot is at stake for both the parties. 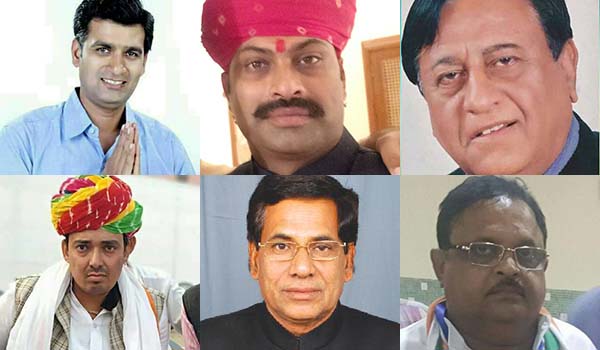 BJP and Congress candidates for by election in Mandalgarh, Alwar and Ajmer constituencies of Rajasthan.

Jaipur: BJP and Congress on Sunday announced the names of the candidates for by-elections scheduled to take place in Alwar, Ajmer and Mandalgarh constituencies of Rajasthan on January 29.

As the battle lines are now clearly drawn, a lot is at stake for both the parties.

While Congress will want to gain ground prior to the elections due by the end of this year, BJP will leave no stone unturned to ensure that its tally didn’t go down in the state assembly. Losing any of the three seats will send a wrong message about the state leadership to not only the masses, but also the party high command in New Delhi.

The final results of panchayat polls have already worried the BJP. Of the 45 seats contested, Congress grabbed 25. Congress’s thumping victory in the rural areas of the state has particularly become a cause for concern for the saffron party.

Congress won 16 panchayat samiti seats out of a total 26. The results for urban bodies were almost a draw with BJP grabbing seven seats out of 14 and Congress wining six.

All the four seats of Zila Parishad were grabbed by Congress. Urban bodies are usually considered a forte of BJP, but Congress winning half the seats troubled the ruling party.

The name of Congress state president Sachin Pilot was doing the rounds for Ajmer, but Congress decided not to field him as his defeat would have damaged the party’s prospects during the 2018 assembly elections.

Pilot was defeated by prominent Jat leader of Ajmer region Sanwar Mal Jat by a margin of 170,000 votes in the 2013 assembly elections. Pilot’s supporters are now projecting him as the chief ministerial candidate.

Alwar will witness a fight between two Yadav candidates. BJP has fielded Jaswant Singh Yadav against Congress’s Karan Singh Yadav. Both are prominent political leaders and represent one of the most dominating castes of the region.