Two day event of RDTM held from July 20-22, receiving 150 buyers. The opening ceremony of RDTM 2018 was kicked off on Saturday with strip cutting by principal secretary, tourism Kuldeep Ranka and president of FHTR, Bhim Singh at the BM Birla Auditorium, Jaipur. 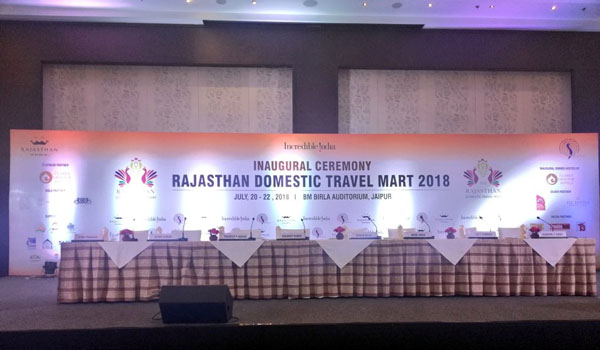 Jaipur: The Rajasthan tourism department in association with Federation of Hospitality and Tourism of Rajasthan (FHTR) organized Rajasthan Domestic Travel Mart 2018 (RDTM) from July 20-22 in the city and received 150 buyers overall, less than expected.

The opening ceremony of RDTM 2018 was kicked off on Saturday with strip cutting by principal secretary, tourism Kuldeep Ranka and president of FHTR, Bhim Singh at the BM Birla Auditorium, Jaipur.

On the primary day of B2B associations at the RDTM 2018, Rajasthan’s extravagance prepare, Palace on Wheels (POW) struck a good deal. It was booked by 51 travellers which will generate revenue of Rs 1.55 crores, according to Chief General Manager, POW, Pradeep Bohra. The bookings were made through Travelogy India. Many tourism department and FHTR authorities were present during the event.

Rajasthan is the second state which conducted Business to Business (B-2-B) exhibition for domestic growth of tourism after Kerala. Rajasthan chief minister, Vasundhra Raje, had earlier announced that the travel mart would be held on a PPP-based model.

Many meetings were held during the event and officials said that it was a great initiative taken by the Rajasthan government to enhance communication among buyers and sellers in the travel industry, networking and identifying challenges that both the parties face. The solutions and suggestions will be used to promote tourism in Rajasthan by overcoming challenges. The Kerala Travel Mart (KTP) will be held in couple of months.