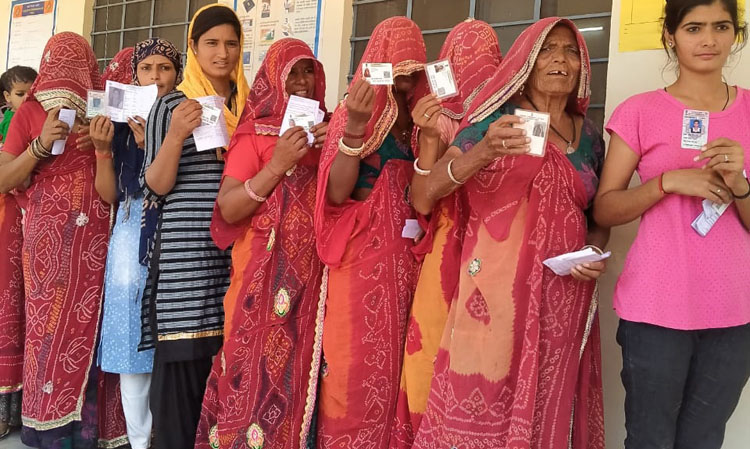 Women voters casting their votes at a polling booth in Mandawa on Monday.

The counting of votes will take place on October 24. While Rita Choudhary of Congress is pitted against Sushila Seegada of the BJP in Mandawa, the fight in Khinwsar is between Harendra Mirdha of Congress and BJP-backed RLP candidate Narayan Beniwal.

Mandawa has always been a Congress stronghold. The BJP won only once in 2018 where there was Narendra Modi wave in the country. BJP candidate Sushila has been Pradhan for three consecutive terms. She was earlier with the Congress, but switched to the BJP when she was denied a ticket. The challenge before her to fight dissidence from the local BJP leader who consider her a parachute candidate.

Rita Choudhary of the Congress has fought assembly elections thrice from Mandawa constituency. She faced defeat twice. Some senior local Congress leadesr including Brijendra Ola and Rajkumar were not in the favour of giving her ticket.

Narayan Beniwal of RLP in Khinwsar is the brother of Hanuman Beniwal. Harendra Mirdha of the Congress is fighting his last election.