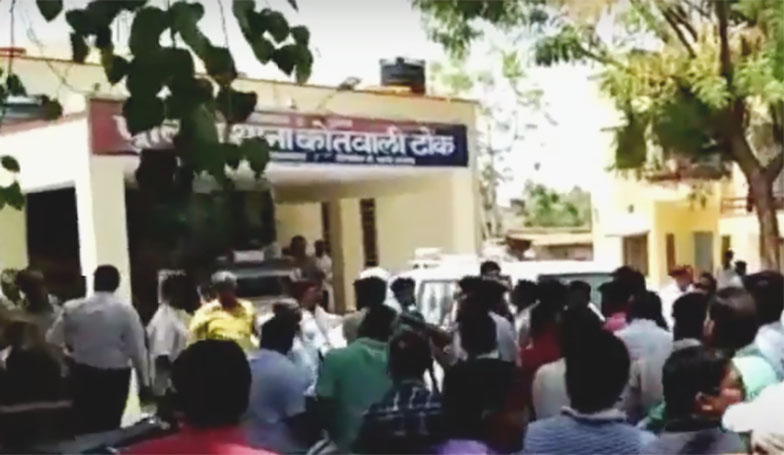 Jaipur: Five policemen including a sub-inspector were suspended for beating up the son of BJP MLA Ajit Singh in Rajasthan’s Tonk town. Tonk MLA Singh’s son Vishal Mehta was allegedly roughed up by the policemen after he came to Kotwali police station for registering a complaint in connection with a dispute over shops attached to a temple. Vishal alleged that he and his supporters including local city municipal leaders were beaten up. They mobiles were also snatched away. Vishal alleged that he and his supporters somehow managed to escape from the police station. Vishal informed his father who was in Jaipur at that time about the incident. As the news spread in the town, BJP workers gathered outside the Kotwali police station and shouted slogans demanding action against the policemen involved in beating up Vishal. Ajit Singh also rushed to Tonk and held a meeting with district superintendent of police (SP) Priti Jain and ASP Avanish Sharma at Kotwali police station. Senior police officials asked Vishal to identify the policemen who attacked him. After he identified five policemen including a sub inspector, they were all suspended. Note: Want to share this story with someone? Just click on the WhatsApp or Facebook icon below:
Follow @ThePinkcityPost