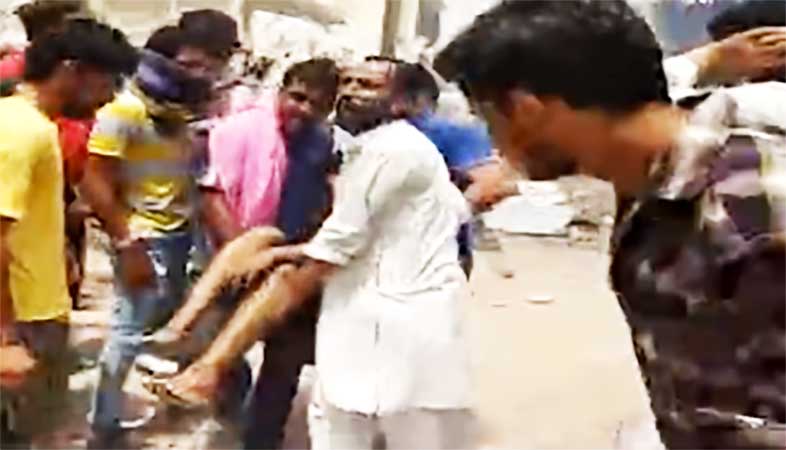 An injured being rushed to an ambulance by local residents after explosion and fire at a firecracker godown in Bikaner.

Jaipur: A godown storing firecrackers exploded in a densly populated area of Bikaner in Rajasthan, killing 5 people and leaving 25 others injured on Friday. The explosion was so intense that three houses adjoining the godown were damaged in the explosion.

At least 16 people have been rushed to a government hospital till the reports last came in. The police have confirmed five deaths after bodies were pulled out of the debris. The condition of some of the injured people is said to be critical. The death toll may rise, police said.

The explosion took place around 11 am in Sohangiri area of Bikaner town. Firecrackers kept exploding for hours and the administration appeared hopeless in containing the situation.

The streets were narrow, making it difficult for the administration to launch an effective rescue operation. Even ambulances couldn’t reach the spot, so injured people and the bodies were wrapped in blankets and transported to ambulances.

Four of the deceased have been identified as Shanti Lal, Anoop, Balraj and Joharan.

After getting information about the tragedy from the police, an SDRF team also rushed to the spot and launched a rescue operation. The lack of resources to contain the fire was quite evident.

There was anger among people as they said that a firecracker godown was being allowed to operate in a densely populated area. They said that complaints have been made several times, but the administration didn’t pay heed.