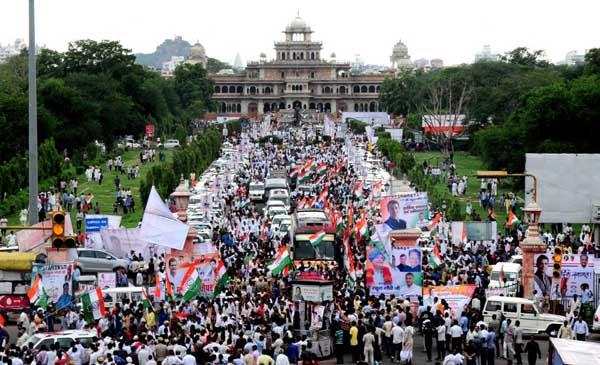 Congress workers in Rahul Gandhi roadshow in Jaipur on Saturday.

Jaipur: Rahul Gandhi took out a 13-km roadshow in Jaipur on Saturday. With this the Congress has formally launched the campaigning for the upcoming assembly elections in Rajasthan. Congress national president once again took on Prime Minister Narendra Modi and raised many issues including unemployment, suicides by farmers, Rafel deal and corruption.

“Those who claim to have a 56-inch chest couldn’t answer my questions on Rafel deal for a minute,” Gandhi said who also visited Govind Dev Ji temple after the roadshow. 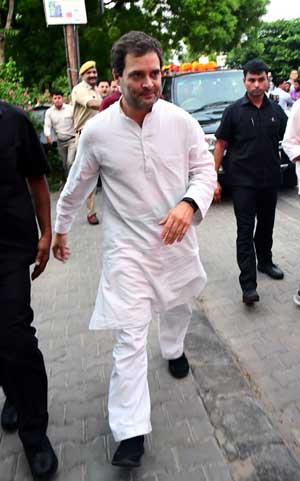 “In the UPA contract, it was clearly mentioned that Rafale fighter jets would be manufactured in India and talented youths would get jobs due to this, but the jets were not be made in France and the profit will go  to Anil Ambani,” said Rahul Gandhi.

He said, “you won’t get employment under the Modi government because you don’t have Ambani as your last name. Only 450 youths are getting employment every day,” said Gandhi.

Gandhi also corned the Modi government on the issues related to demonetisation and GST.

He said that after coming to power in 2019, the Congress government would get rid of taxes at 5 different levels and come up with a simplified taxation system where taxes are paid only once. He also promised to bring petrol and diesel under the ambit of GST to reduce inflation rate.

“Modi ji said that he would give employment to 2 crore youths every year and farmers would get the appropriate price for their crops. He also promised to protect women and gave the slogan of beti padhao, beti bachao, but rape cases have increased across the country,” said Gandhi.