He will first address a public meeting at Suratgarh followed by a rally in Bundi around noon. After that, he will address a booth level sammelan in Ramleela Ground of Jaipur at 5 pm. 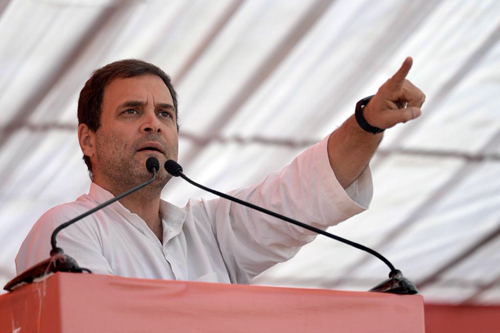 Jaipur:  Congress National President Rahul Gandhi on Tuesday will be on a campaigning tour for the upcoming Lok Sabha elections 2019. This will be Rahul Gandhi’s third visit to Rajasthan after the assembly election 2018.

He will first address a public meeting at Suratgarh followed by a rally in Bundi at 12 pm. After that, he will address a booth level sammelan in Ramleela Ground of Jaipur at 5 pm.

The Congress is yet to release the list of its candidates for the Lok Sabha constituencies.

According to the party officials, the first list in the state will be released after Rahul’s visit to Rajasthan on March 25.  A total of 15 names are expected to be announced in the first list, likely to come out on Wednesday.

Sources said the party may field 12 former and sitting MPs who lost in the Lok Sabha elections 2014.

Preparations for making Rahul’s rally a success in the state has been going on for the past few days under the supervision of Chief Minister Ashok Gehlot and Deputy Chief Minister Sachin Pilot.

Party workers and supporters are making every possible effort to make the event a big hit.

Rahul Gandhi announced on Monday that the government – if voted to power – would deposit Rs 6000 per month in the bank accounts of millions of poor families. The announcement was made under   Nyuntam Aay Yojana (NYAY).

Rahul promised a minimum income guarantee scheme. He said that the basic income of every poor family in India does not fall below Rs 12,000 a month.

The 20% poorest of poor families would get Rs 72,000 directly transferred in their accounts. This is the final assault on poverty, added Gandhi.

The Bhartiya Janata Party (BJP) released its first list of candidates for upcoming Lok Sabha elections 2019 and finalized the names of 16 candidates from Rajasthan. There are 25 Lok Sabha constituencies in the state.