Gandhi said that multiple food processing units will be installed near farms in the state, paving the way for a Green Revolution. 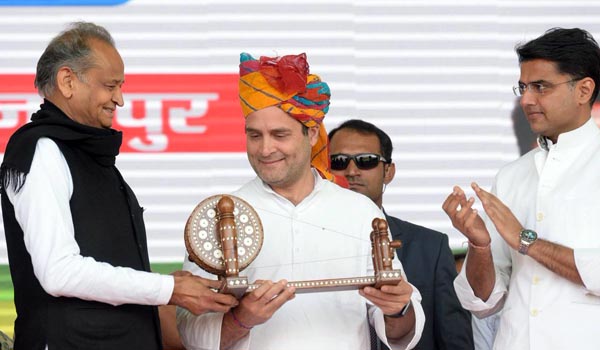 Jaipur: Congress President Rahul Gandhi addressed a farmer’s rally at Vidhyadhar Nagar Stadium of Jaipur on Wednesday. He thanked farmers for their support to the party and said that the Congress government will work towards the development of the state’s farmers.

Gandhi said that multiple food processing units will be installed near farms in the state, paving the way for a Green Revolution.

He said that the offices of the Congress and its leaders are always open to the public. Gandhi alleged that PM Modi promised employment and development but he brought demonetization and GST and destroyed small business and farmers.

Gandhi also brought up Rafael deal in his speech asking why Prime Minister Narendra Modi did not appear in Lok Sabha discussions while Defense minister Nirmala Sitharaman spoke for hours and defended BJP and PM Modi.

Rahul Gandhi with other ministers left the spot around 2:45 pm.

Chief Minister Ashok Gehlot and Dy Chief Minister Sachin Pilot also delivered their speech at the rally and said that whatever promises related to farmer’s loan waiver was made by the Congress were implemented within less than 10 of forming the government.

A large number of people especially farmers reached Vidhya Dhar Nagar stadium for Rahul Gandhi’s Kissan rally. This was his first rally in Jaipur after the Congress party came to power in Rajasthan.