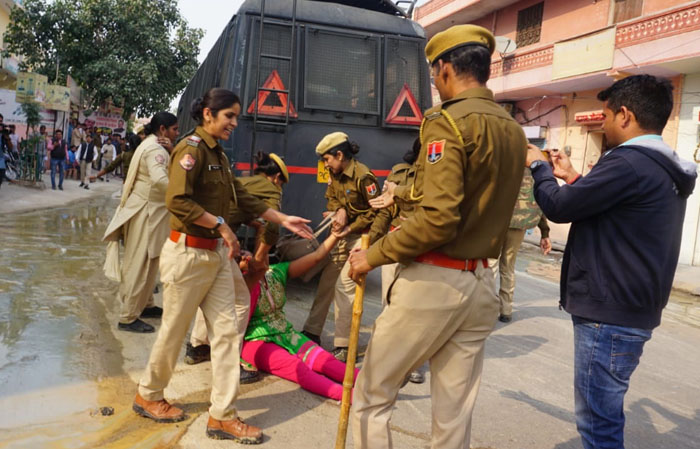 A woman protestor being dragged away from outside the Congress headquarters in Jaipur.

Jaipur: A huge crowd of women, demanding employment, protested outside the Pradesh Congress Committee (PCC) headquarters in Jaipur on Monday. When the cops tried to disperse the crowd, the women protestors clashed with them. Many women were taken into custody for disrupting peace. The protestors were holding talks with minister Bhanwar Singh Bhati till the reports last came in.

The women candidates started gathering at the Congress headquarters from 11 am. Soon the crowd swelled. The protestors were demanding that the government should conduct all the recruitment exams which the Congress had promised before coming to power.

“We have five demands. They include filling up vacancies in government jobs and fulfilling the budget promise of 75,000 new recruitments in Rajasthan government departments,” said a woman protestor.

After the protestors started shouting slogans and tried to enter the PCC premises. The cops tried to stop them which led to a scuffle between police and protestors.

The police had to resort to minor lathicharge in order to disperse the crowd.

“We are in talks with the protestors and will soon resolve the issues. We will consider all the demands made by the protestors. The government will fulfil its promises, so people should have patience,” the minister told media persons.

Many women were arrested and taken to the nearby police station. Some of them were booked under section 151 of CrPC. Heavy police force was deployed at PCC headquarters to restore law and order.