People stated a sit-in at the museum located in n Madhvendra Bhawan of the fort on Friday when they allegedly saw a male sex organ being advertised to be scared Shiva Linga. 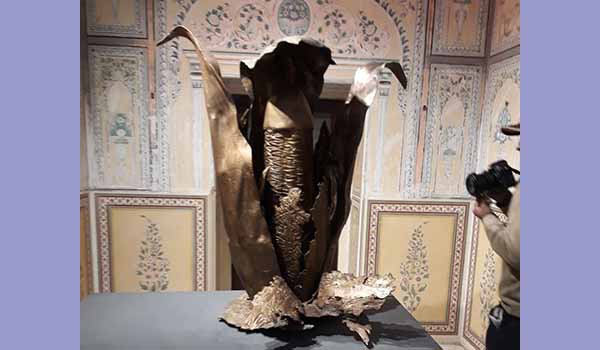 A male sex organ-shaped stature was allegedly being depicted as Shiva Linga at Nahargarh Fort museum in Jaipur.

Jaipur: Some organizations on Friday protested at a museum inside Nahargarh Fort of Jaipur alleging that a male sex organ-shaped figure was put on display and advertised to be the idol of Shiva Linga.

People under the banner of Dharohar Bachao Samiti registered a complaint with the local police station also.

Bharat Sharma of the samiti said that people staged a sit-in at the museum located in Madhvendra Bhawan of the fort on Friday when they saw a figure of male sex organ being advertised to be Shiva Linga.

“This is a mockery of the Hindu religion. We won’t tolerate this,” said Sharma.

He added that Shiva Linga is an aniconic representation of the Hindu deity and is used for worship in temples.

“The museum management have made a mockery of people’s religious feelings,” said Sharma.

He said that a complaint has been registered against the artist who made this idol, Nahargarh Fort management and the archaeological department for hurting the religious sentiments of people.

The protestors demanded that the idol be removed from the museum immediately.

“The Nahargarh Fort management will be responsible for any law and order situation if this thing is put on display again,” said Sharma.