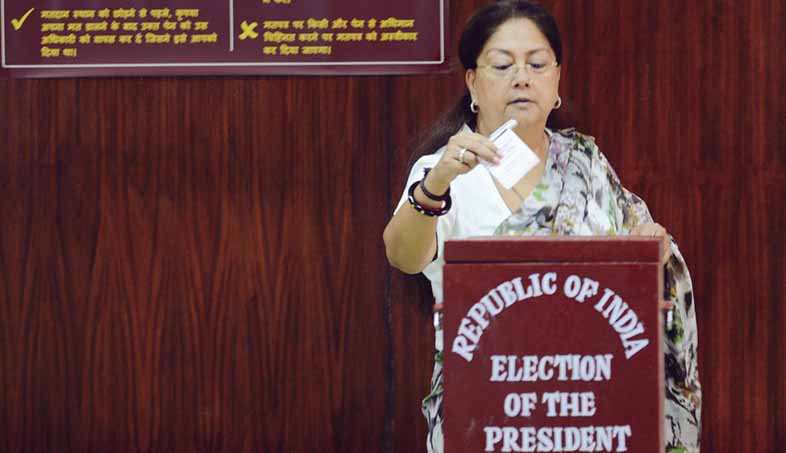 Jaipur: Voting for the presidential election began at Rajasthan assembly building in Jaipur at 10 am. State minister Srichand Kriplani was the first one to vote. By the reports last came in, all 199 votes had been cast. The secret ballot voting will continue till 5 pm. Two hundred Rajasthan assembly legislators, 25 MPs and 10 Rajya Sabha members will cast their votes from the state. All the MPs from the state will cast their votes in the parliament. Chief minister Vasundhara Raje, assembly speaker Kailash Meghwal and BJP state president Ashok Parnman have voted.

Voted in the Presidential elections 2017 at the Vidhan Sabha today. #PresidentialElection pic.twitter.com/FYsSpKEv4y

All the preparations for the polling had been completed on Sunday. Ram Nath Kovind is set to win the election with 70 per cent of voters backing him. However, political parties cannot issue a whip to their members to vote for a particular nominee which means that cross-voting is possible. Special arrangements have been made by the election commission to keep the polling secret and transparent. MLAs are being allowed entry into the assembly building only after they show ID. Ashok Gehlot cast his vote in Ahmedabad.

The remaining 199 votes will be polled here in Jaipur. Special training sessions were held by Congress and BJP for MLAs. BJP gave its MLAs the voting lessons at 8-Civil Lines, while the Congress MLAs were trained at the official residence of Rameshwar Dudi, the leader of opposition in the assembly.
Follow @ThePinkcityPost