He was peeved over suspension for alleged negligence. Selling the cards to the scarp dealer was his way of taking revenge. 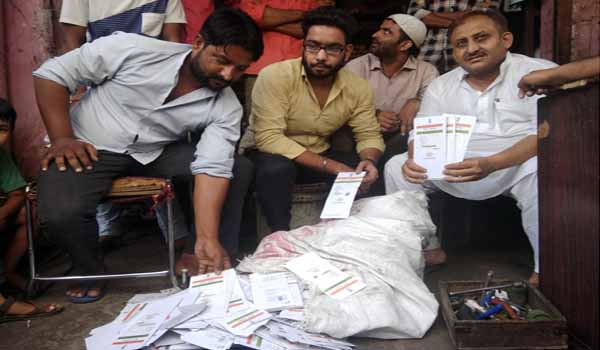 Jaipur: The postal department in Jaipur is mulling to lodge an FIR against a postman after an enquiry revealed that he sold more than 1830 newly issued Aadhaar cards to a scrap dealer. He was peeved over suspension for alleged negligence. Selling the cards to the scarp dealer was his way of taking revenge, senior postal department officers were quoted as saying.

The postman was identified as Satish Chand Sharma. The 1830 Aadhaar cards belonged to residents of Ward Number – 76 in Jaipur. The cards reached the general post office (GPO) before June 6. Satish was suspended by the GPO administration for alleged negligence in carrying out his duties on June 6.

“Before going off duty, he sold the card to a scrap dealer. A further enquiry has been launched and we are planning to lodge an FIR with Jalupura police station in this regard,” said a senior postal department officer.

The cards were brought to GPO after they were found in possession of the scrap dealer
The scrap dealer was Islam Khan who owns a shop and godown near Chhoti Masjid. His son was sorting through the scrap collected on Thursday when he found Aadhaar cards in a sack. He told other shopkeepers following which the police were informed. When the police found that the cards were to be distributed by GPO, they informed the department’s officers. The GPO officials then reached the scrap dealer’s shop.