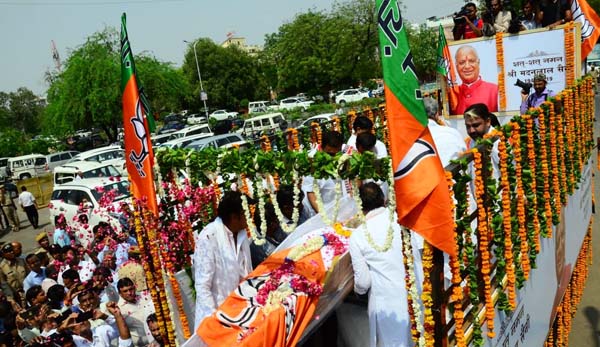 The body of Madan Lal Saini being brought to BJP headquarters in Jaipur.

Jaipur: The body of Rajasthan BJP president and Rajya Sabha member Madan Lal Saini was brought to Jaipur on Tuesday. It was kept at the BJP headquarters in the city where all the senior leaders of the Congress and the BJP paid their last respect. The body is now being to Saini’s native place in Sikar for final rites. His last remains will be consigned to flames at 3 pm in Sikar.

Saini was active in politics for the past five decades. He was elected a member of legislative assembly from Udaipurwati assembly constituency. He was elected as the member of Rajya Sabha last year. He held many positions in the organization. He had been the chairman of the disciplinary committee for a long time. He fought Lok Sabha elections twice, but couldn’t win.

Rajya Sabha was adjourned on Tuesday after the member paid tribute to Saini. It will resume in the afternoon, according to the reports.