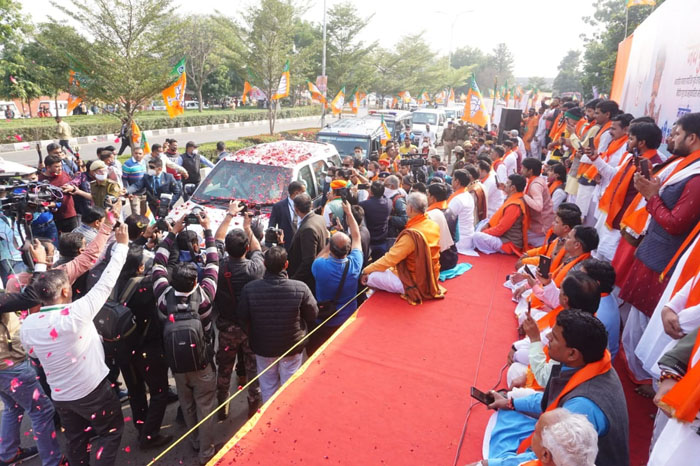 Political rallies are being organized even as Omicron cases have been detected.

Jaipur: The Congress expects more than 1 lakh party workers to attend the rally being organized at Vidhyadhar Nagar Stadium on December 12. The BJP recently organized a convention of public representatives that saw the participation of the party workers in huge numbers. The city residents are concerned that this irresponsible attitude of political parties will play a crucial role in starting the third wave of Covid-19 as the Omicron variant has already been detected in more than 9 people in the state.

The Congress leaders including cabinet ministers are leaving no stone unturned to mobilize the crowd for the rally at Vidhyadhar Nagar stadium. They are visiting various districts and asking party workers to attend the rally. The Congress leaders argued that when the prime minister of the country could organize rallies, why not the Congress. Both Sonia Gandhi and Rahul Gandhi are expected to address the rally.

The BJP had a Jan Pratinidhi conference on Sunday. Since the BJP has already organized a public function, its leaders are not in a position to oppose the Congress rally.

Apart from neighbouring states, the leaders and workers will come from all over the country to attend this rally. It is almost impossible to maintain social distancing in such a big rally.

Nine cases of Omicron infection have been detected in Jaipur so far. On Monday, a woman who arrived at Jaipur International Airport from Ukraine also tested positive for Covid-19. She has been admitted to RUHS Hospital.