Modi blames Congress for the delay in the project and misleading the nation for years. 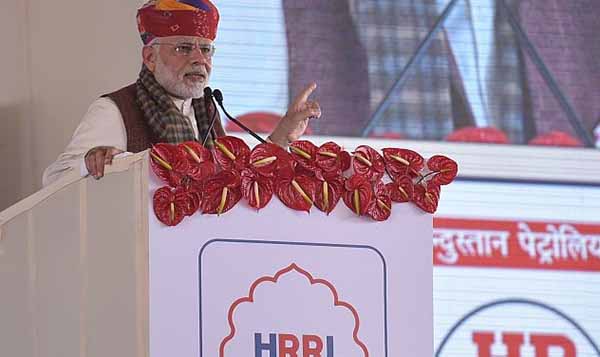 Jaipur: Prime Minister Narendra Modi inaugurated project commencement of Pachpadra oil refinery in Barmer district of Rajasthan on Tuesday. While addressing a public meeting, Modi said that Congress and drought travel hand-in-hand. “It was told that drought follows wherever Congress goes,” said Modi. He said that it was the time for 'Sankalp Se Siddhi.’ “We have to identify our targets and work towards achieving them by 2022, when we mark 75 years of freedom,” Modi said. Remembering Bhairon Singh Shekhawat, the PM said that he was a great man, who worked towards modernizing Rajasthan. He also prayed for the speedy recovery of Jaswant Singh. The PM blamed the Congress for delay in refinery project and said, “Some people mislead citizens often. Their misleading the nation on Barmer refinery is not the exception; it is a norm when it comes to them. There are several such areas in which they have been misleading the nation for years.” He pointed out several measures to empower the poor like the Jan Dhan Yojana, Ujjwala Yojana and ensuring power for all. He spoke about how the Congress government delayed One Rank One Pension and did not take note of the difficulties ex-servicemen faced. “For 40 years nothing was done about OROP. Before the 2014 elections a token sum was allocated towards OROP even when it was widely known this sum is unrealistic and too less. It was our commitment to make OROP a reality and we worked towards making that possible… The previous Government allotted Rs. 500 crores for OROP knowing very well this number is not the accurate figure. Is this the respect they had for the armed forces”, he said. The PM said that for the Congress, 'Garibi Hatao' was an attractive slogan. He added, “Congress nationalized the banks but the doors of the banks never opened for the poor. Jan Dhan Yojana changed this and the poor got access to banking facilities.” Modi further said that “we completed 70 years of freedom but there were 18,000 villages without access to electricity. Imagine the suffering of those living in the villages without electricity. We began working on electrification and have achieved significant progress in this direction.” A joint venture agreement was signed between the Rajasthan government and HPCL in August. Earlier it was expected that the PM would lay the foundation stone in December, but it was postponed apparently to make the date as much as closer to the by-elections as possible. The refinery will come up on nearly 12500 bigha land allotted in the name of a join company of the state government and HPCL. The land is close to a salt lake in Pachpadra. Under the project, a crude oil pipeline (50-60 km in length) and a water pipeline (nearly 200 km in length) will be laid. With a capacity of producing 9 million metric ton oil per annum, the refinery will cost Rs 43,149 crore. HPCL’s share will be 75 percent, while rajasthan government’s equity will be 26 percent. The state government will pay Rs 3738 crore for its 26% equity. The government will give interest free loan (the viability gap funding) of Rs 16,845 crore to HPCL. The viability gap funding (VGF) will be Rs 3,736 crore annually. This will be paid over a period of five years by the government. Read Also: New MoU for Barmer Refinery: Important things you should know
Follow @ThePinkcityPost