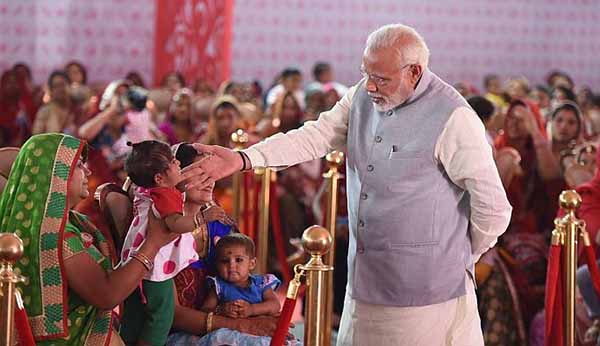 Modi said that the entire nation is connected with Jhunjhunu through the power of technology, so he was able to address people across the country. He said that Jhunjhunu district has contributed towards furthering the Beti Bachao, Beti Padhao movement. He condemned the mindset that believes boys are better than girls. He said there is no question of discrimination based on gender.

The Prime Minister stressed on the importance of girls getting access to quality education, just like boys.

Emphasizing that a daughter is not a burden, he said girls are bringing pride and glory for our nation, and excelling in several fields.

Modi also spoke of the importance of providing proper nutrition to children. He said Mission Indradhanush has brought an extremely positive change in the lives of women and children.

Elaborate security arrangements had been made in Jhunjhunu during the PM’s visit on Thursday.

Modi also interacted with district collectors, mothers and girl children who were beneficiary of the Beti Bachao Beti Padhao scheme.

Rajasthan chief minister Vasundhara Raje thanked PM Modi for choosing Rajasthan for the launch of a vital scheme and the expansion of another. Rajasthan will always support the efforts of the PM towards women empowerment, she added.