Petrol pump strike in Jaipur runs out of steam; vehicles getting fuel 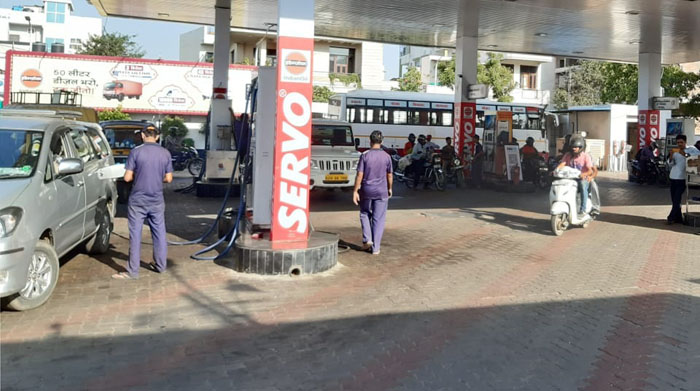 Vehicles getting fuel at a petrol pump in Jaipur on Wednesday.

Jaipur: The strike called by Rajasthan Petroleum Dealers Association was effective in Jaipur till afternoon on Wednesday, but most petrol pumps opened by evening. Vehicles queued up at petrol pumps in the city when people saw petrol pump employees providing fuel to customers.

Nearly 4500 petrol pumps went on strike in the state from 6 am on Wednesday to 6 am on Thursday against the VAT levied by the Rajasthan government. The VAT is higher than most other states, the petrol pump dealers association alleged.

Rajasthan Petroleum Dealers Association President Sunit Bagai said that VAT is higher in Rajasthan than other states. Compared to the prices of petrol and diesel in neighboring states, the fuel cost Rs 5-9 more in Rajasthan. The prices of petrol a d diesel are lower in the surrounding states of Madhya Pradesh, Haryana, Punjab and UP. Due to the difference in the price people go across the border to get fuel in the bordering areas of the state.

“The fuel is being provided only to ambulances and fire fight vehicles. We have been requesting the government to lower the VAT for a long time, but since no one is paying attention we are forced to take this step. Our agitation will be more aggressive if our demands are not met,” said an association officer bearer.