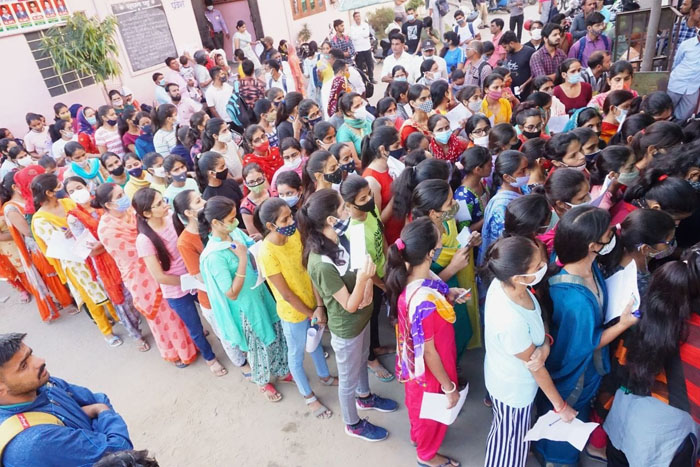 Patwari examination was held on Saturday.

Jaipur: Cheating attempts were foiled during the patwari recruitment examination in many districts across the state including Bikaner, Dungarpur, Baran, Bharatpur, Jodhpur, and Jaipur on Saturday. The internet services were snapped by the administration, but many people were caught using Bluetooth. At least 15 people were taken into custody for cheating attempts.

Of these, 5 were from Jodhpur and 10 from Bharatpur. Police has arrested 5 people while selling papers. They sold the bogus Patwari recruitment exam paper to many youths. However, during investigation it was found that the paper sold was a dummy paper. The youths to whom the paper was sold did not even know whether it was real paper or fake paper. Police are interrogating the five youths.

Police has caught 10 youths in Bharatpur with Patwari recruitment papers. They were appearing in the exam in a centre in Alwar. On the basis of their phone location, they were caught in Nagar town of Bharatpur. They had gone from Bharatpur to Agra a day earlier. Then they came back. Some papers were seized from their possession. Police are matching the paper that were sized with the actual examination paper.

From a center in Adarsh ​​Nagar, Jaipur Police caught a youth copying through Bluetooth. He had gone inside with Bluetooth in the centre. Police is interrogating him

Baran Police caught two dummy candidates while giving the exam in place of the real candidates. Four of their associates have also been arrested. Dausa resident Chetan Meena's center was Apex School. In his place, Patna resident Roshan Kumar was appearing in the exam. His photo did not match, so Roshan was arrested.