Parents protest against fee hike by private schools in Jaipur 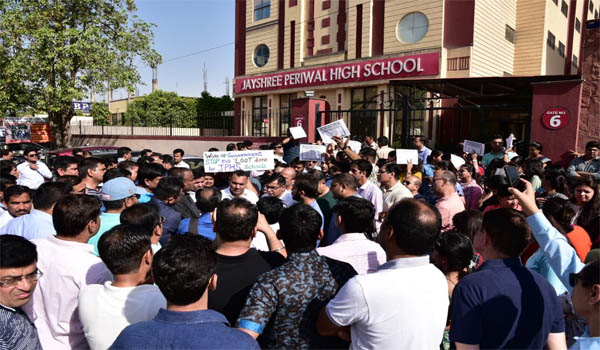 Jaipur:  Parents of children studying in some private schools protested in the city on Monday against the arbitrary fees hike.

Many shouted slogans outside– Jayshree Periwal High School – located at Chitrakoot for four hours while others reached Shiksha Sankul for complaining against Mahaveer Public School on Monday.

The parents wrote a letter to the district education officer against the arbitrary fees hike in the private schools like Mahaveer and Jayshree Periwal of Jaipur.

According to a parent, the school is increasing the fees by 15% – 20% every year and is extensively charging for stationary, books and uniforms.

‘The stationary charged by the school costs 30% higher than the market price. Syllabus books of one primary class student costs around Rs 10,000’, said parents of a student studying in Jayshree Periwal School.

The administration of the Jayshree Periwal School has denied the allegations made by the parents. They said that they are following the rules with regard to school fee hike.

Similarly, the officials of Mahaveer Public School said that the fees were increased after taking the consent of the parents’ committee.

Parents said that they have no clue about the parents’ committee and its members.

Jaipur district Education officer Ram Chandra Pilaniya has constituted a three-member committee to look into the matter. The committee will soon submit its report to the state government.