PM Modi received the Guard of honor at the Jodhpur airport. He then reached Jodhpur military station to inaugurate the ‘Parakram Parv’ exhibition. 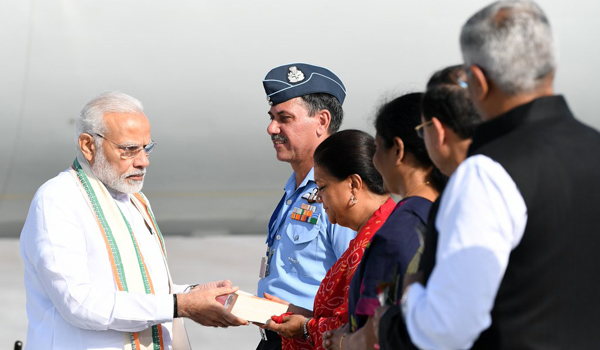 PM Narendra Modi being welcomed by dignitaries upon his arrival in Jodhpur.

Jaipur: Prime Minister Narendra Modi reached Jodhpur on the eve of the second anniversary of 2016 surgical strike against terror pods in Pakistani territory by Indian forces. He inaugurated ‘Parakram Parv’ exhibition at the Jodhpur military station. Parakram parv will be celebrated in India till September 30.

PM Modi received the Guard of Honour at the Jodhpur airport. He then reached Jodhpur military station to inaugurate the ‘Parakram Parv’ exhibition.

The exhibition will showcase the story and strong will of Indian soldiers. How they are contributing to the nation’s development and give out a message about India’s army powers. It will continue till September 30 and is open for visitors.

PM Modi paid homage to the martyrs at Konark War Memorial in Jodhpur.

Rafale deal, anti-terrorism operation in Kashmir, dealing with China on International border issues and measures to control China’s intervention in the Indian Ocean are some of the issues that will probably be discussed during the conference.

This is the third time when the unified commander conference is being organized outside Delhi. In 2016 it was held at INS Vikramaditya and in 2017 it was conducted at Indian Military academy in Dehradun.

Unified commander conferences used to be in Delhi only until 2015. After coming to power, PM Modi decided to conduct this meeting at different army bases across the country.