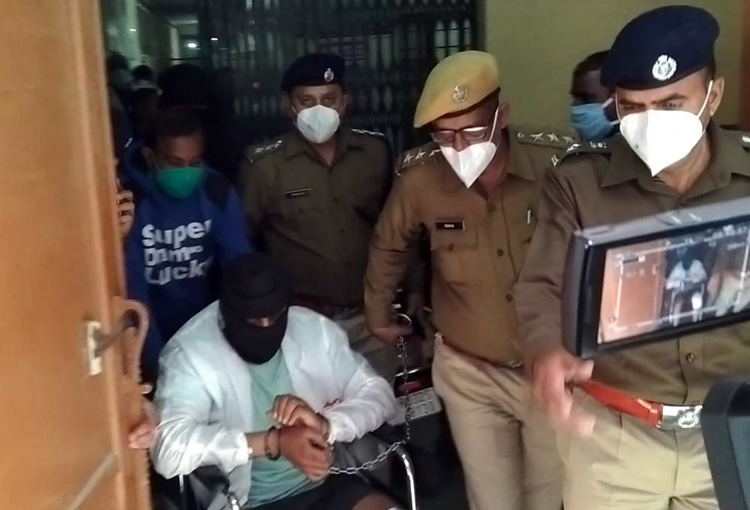 Papla Gurjar being produced in a court.

Jaipur: A court in Behror town of Alwar district remanded criminal Papla Gujjar in 13-day police custody, two days after he was arrested from Kolhapur in Maharashtra. Papla was using a crutch to walk as he had injured his legs while attempting to escape from the police. When he was surrounded in Kolhapur, he jumped off a three-storey building and injured his legs.

He was taken to the court under heavy security arrangements. Earlier, the police arranged for an identification parade. For this, he had been remanded in two-day judicial custody after his arrest. A police office said that the police remand will end on February 11. During his remand, the police would try to find out who sheltered the most wanted criminal.

Senior police officers have suspended a quick response team (QRT) driver deputed in Neemrana for sharing information about police’s movement with the members of Papal Gujjar gang. Sources said that he would tip off the gang members whenever the police carried out searches to arrest Papla. It helped the most wanted criminal evade arrest.

The role of some other policemen is also under investigation, sources said. A add SP-rank officer is heading an enquiry to find out who else in the police department leaked information to the Papla Gurjar gang.

The police are also trying to determine whether Papla’s girlfriend Jia was aware of her boyfriend’s criminal background. She has denied having this knowledge during preliminary police interrogation. She also is currently in police custody.