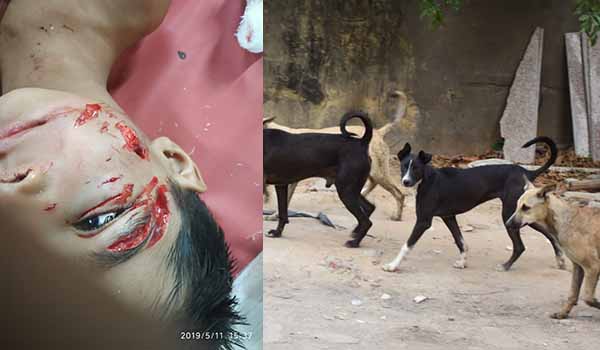 Child bitten by dogs (on the left). Street dogs in Malviya Nagar.

Jaipur:  Raising a question mark over the efforts of the Jaipur Municipal Corporation (JMC) to deal with the menace of stray animals, street dogs seriously injured 10 people in Malviya Nagar over the last 24 hours. The incident has come a day after the street dogs bit an 6-year-old girl in Patrakar Colony. The child is battling for life at a hospital, according to the family members.

The dogs chased people in Sector – 5 and Sector -8 of Malviya Nagar area. The local residents claimed that nearly 22 people were bitten by dogs in the past 3-4 days. They had to take treatment at hospital for dog bites.

The residents complained that their repeated plea to the JMC officials have failed on deaf ears.

“We have requested them to catch these stray dogs many times, nobody is paying head. They have even stopped taking our calls,” said Niranjan Sharma, a local resident.

On Saturday, 6-year-old girl, Mahi, was attacked by a group of more than a dozen street dogs while she was on her way to buy chocolates. She sustained serious injuries and admitted to the ICU of a private hospital for treatment.

There had been cases of pedestrians being gored to death by stray bulls and cows on the city roads. The JMC officials had promised that the teams had been formed to catch all the stray animals, nothing seems to have been done.