Panic among patients as fire breaks out at SMS Hospital OT 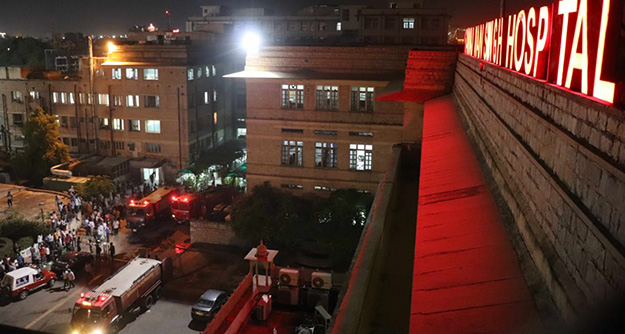 Jaipur: A major fire broke out at operation theatre (OT) – 2 of SMS Hospital late on Friday, creating panic among patients and sleeping in the nearby ward.  The hospital administration shifted the patients to the city ward following the fire. It took seven fire tenders nearly half an hour to douse the fire.

A fireman was injured when a glass panel fell on his hand while he was trying to douse the fire. The fireman, identified as Kamal, was admitted to hospital for treatment.

There was no one in the OT room. “There was just some garbage and old clothes there. They were destroyed. No harm to anyone was caused by the fire. What triggered the fire is still under investigation,” said a senior hospital administration officer.

Sources said that the building where fire broke out don’t have fire NOC from JMC. It didn’t proper fire safety equipment.

A major fire had broken out at the medical lifeline store killing a woman patient last month. The store was being probed for the alleged corruption in the sale of medicines meant for Below Poverty Line (BPL) patients at discounted price. Recently, a SMS Hospital administration committee had probed whether these medicines were sold to normal patients at regular prices illegally. The fire had gutted the refund stock and many documents that were under the scanner during the probe.