The tournament to identify football talent in Rajasthan

‘Oorja’ CAPF Youth Under-19 Football Talent Hunt Tournament (For Boys & Girls)-2017 was kicked off on Sunday at BSF HQ in Jodhpur.

Jaipur:  This is your chance to prove your talent in football. The Central Armed Police Force (CAPF) will organize football tournaments in Rajasthan from May 1 to identify talent in the game. ‘Oorja’ CAPF Youth Under-19 Football Talent Hunt Tournament (For Boys & Girls)-2017 was kicked off on Sunday at BSF Rajasthan headquarters in Jodhpur. The chief guest at the opening ceremony was MP Jodhpur Gajendra Singh Shekhawat Anil Paliwal IG BSF Rajasthan Frontier said FIFA under-17 World Cup would be held in India for the very first time in October 2017. The tournament will leave a lasting legacy for the first FIFA tournament in India, he said. 'Mission 11 Million' has been planned to take football at least 11 million boys and girls from the country.  He further informed that Rajasthan Frontier Jodhpur is conducting the first phase of ‘Oorja CAPF U-19 football Talent Hunt Tournament’(Boys & Girls). MP Shekhawat praised this initiative of talent hunt. Shekhawat elaborated upon the importance of sports, especially football and said that the progress of any country can be judged with its economic position, strategic policies and its achievements in various international sports events. He also appreciated the duties being performed by BSF troops on the border. The logo of Oorja was unveiled in the ceremony.  Mascot of tournament ‘Gabru’ the cub was also presented. Arjun awardee football player Magan Singh Rajvi was present. A camel safari was flagged off in Jodhpur with camel riders displaying logo and mascot of Oorja tournament and banners for promotion of this event. 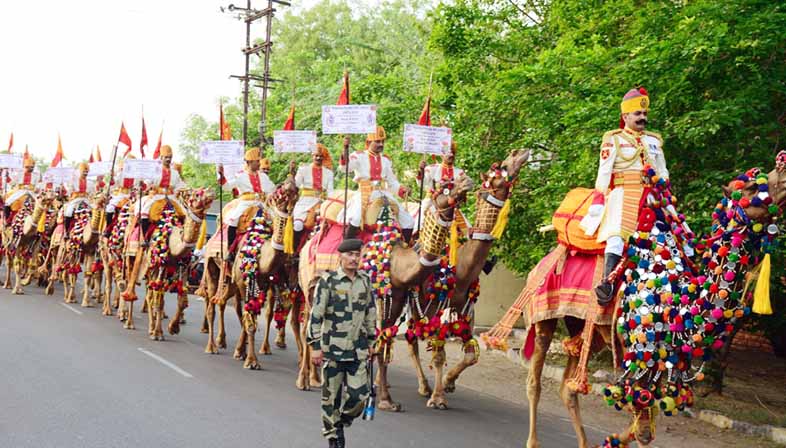 BSF officials said that the central government has decided to make FIFA World Cup a catalyst for change, the tipping point for football in the country On the direction of Ministry of Home Affairs, CAPF is organizing a football tournament titled as ‘Oorja CAPF Youth U-19 Football Talent Hunt Tournament (Boys & Girls)-2017’ throughout all the states of country. The event has been designed to give an opportunity to every child of the country to play football. The legacy programme of FIFA U-17 world Cup “Mission XI Million” has been planned to take the beautiful game of football to at least 11 million boys and girls across the country. “The objective of the tournament is to be part of ‘Mission XI Million’, to create fervor among the youth of India towards football, to select promising players to represent our country in Asian championship and to recruit young and emerging players in CAPFs,” an official said. This tournament is being jointly organized by CAPFs under the aegis of All India Police Sports Control Board. The tournament will be organized in three phases enlisting separate matches for boys and girls. First phase of tournament will be conducted from May 1 to May 10. Second phase will be held from June 8 to June 25 and third phase from July 8 to July 25. As a part of tournament, Border Security Force is conducting matches of first phase in seven states - Rajasthan, Gujarat, Punjab Tripura, West Bengal, Karnataka and Andaman and Nicobar Island. In Rajasthan, this tournament is being organized at STC BSF Jodhpur and Umaid Stadium, Jodhpur under the overall supervision of HQ BSF Rajasthan Frontier for which an organizing committee comprising of 14 senior officers of BSF has been constituted. The names of 16 teams participating in the first phase of tournament to be held in Rajasthan State, are: Boys Teams Girls Teams These eight teams will play league matches in two different pools and final match will be played between winner teams of both the pools. Thus a total 32 matches (16 of Boys and 16 of Girls) will be played in the first phase of tournament in every state and total 1152 matches will be played in whole country. Upon conclusion of first phase, one combined team both for under-19 boys and girls from every state and total 36 teams from all over India will be selected. The 36 teams so selected will be concentrated at prescribed places for intensive practice and co-ordination and thereafter will represent the respective state or CAPF in the second phase to be held from June 8. For second phase of tournament, six Zones have been earmarked. The team of Rajasthan State so selected will play in second phase in Chandigarh zone.  Total 120 matches will be played (20 matches in each zone) in the second phase and the winner team of each zone (six teams) will participate in the third phase of tournament to be held from July 8. The final match of tournament will be played at Delhi on July 25.
Follow @ThePinkcityPost