Anuj Jat was arrested from Chittorgarh 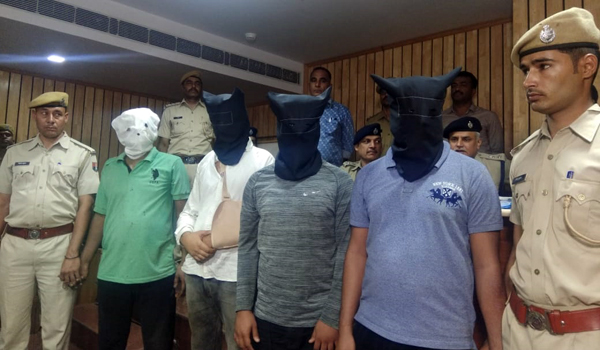 Jaipur: Rajasthan anti-terrorist squad (ATS) and Sikar police have arrested one more accused in connection with the firing that led to the death of Fatehpur SHO Mukesh Kanungo and constable Ramprakash in Fatehpur town of Sikar district last week. The accused has been arrested from Chittorgarh.

The accused Anuj Jat alias Chhotha Pandiya (25) is a resident of village Bahadurvaas near Mandawa police station in Jhunjhunu. He was currently living in Sadar area of Fatehpur town of Sikar.

After the murder of SHO Mukesh Kanungo and constable Ramprakash, police announced the prize money for four accused including Ajay Chaudhary. The prize money of Rs 20,000 was announced for the accused Anuj Jat.

A special team from Jaipur Commissionerate was sent to Chittorgarh regarding the arrest of the accused. With the help of technical evidence, police arrested Anuj Jat from Chittorgarh.

The police arrested five criminals including Ajay Chaudhary, Jagdish Dhankar and Rampal Choudhary from Mumbai a few days ago.

There had been many rumors since Mukesh Kanungo and Ramprakash were murdered in a daredevil firing. The police had to ban the internet in order to prevent the spread of these rumors and make it harder for criminals to communicate among themselves using social media platforms such as WhatsApp.

SHO Mukesh Kanungo and constable Ramprakash were shot dead by criminals in Fatehpur town of Sikar district on Saturday night. Fatehpur Kotwal Mukesh received a tip-off that Ajay Choudhary and Jagdeep Dhakar were in the area. The SHO launched a search for the duo.

A car was intercepted. The police team started searching the vehicle, but the criminals suddenly opened fire. Bullets pierced Mukesh Kanungo’s neck. Constable Ramprakash sustained bullet injuries on this chest. Both were rushed to a hospital where they died while undergoing treatment.