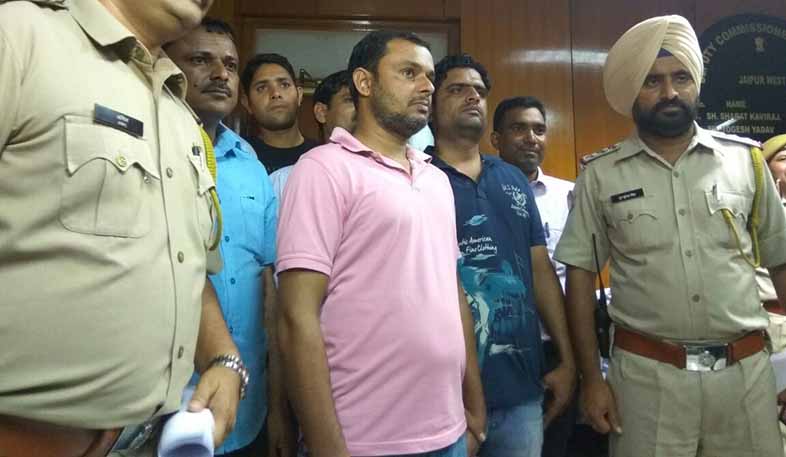 Kesar Singh who was arrested in Sunil Lakhera murder case.

Jaipur: Nearly three months after history-sheeter Sunil Lakhera was murdered in broad day light at Kanakpura railway station crossing in Kardhani area, the police on Wednesday arrested the main accused, identified as Kesar Singh. The accused was the member of the Bhanu Pratap Singh’s gang and was operating it after his murder. Kesar Singh was found taking shelter in a farm house near Kota. He was planning to kill a member of the rival gang and had arranged for weapons and a vehicle for this, police officials said adding that the gang war averted with the arrest.

The murder of Sunil Lakhera occurred in the last week of April. Lakhera was in a car when a bike-borne man intercepted the car and opened firing near Kanakpura railway crossing The incident was witnessed by local residents, shopkeepers and passers-by. Lakhera had many cases of land grabbing, betting and violence registered against him with Jhotwara police station.

“We studied the footages of CCTVs installed in the area and conducted technical investigation. We determined that Kesar Singh had killed Lakhera,” said DCP, west Ashok Kumar Gupta.

A police constable got a tip off that Lakhera was hiding in a farm house on Baran Road near Borkhera village in Kota.

A police team was immediately rushed to Kota. The 38-year-old criminal was arrested and brought to Jaipur.

“During preliminary interrogation, Singh confessed to the crime and told us that he murdered Lakhera over some monetary dispute,” said DCP Gupta.

He added that Singh was the second-in-command in the Bhanu Pratap Singh gang. After Bhanu Pratap was murdered, he took over the gang. He was planning to take on the Shivraj Singh gang accused of killing Bhanu Pratap. Kesar Singh had arranged for weapons and a vehicle carry out the murder.

Rs 1 lakh cash was confiscated from his possession.