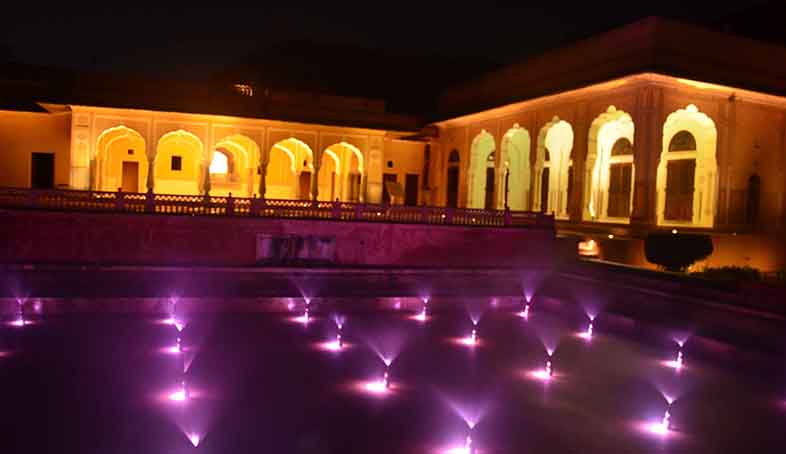 After Vidyadhar Garden, night tourism will begin at Sisodia Rani Garden in Jaipur.

Jaipur: Buoyed over a great response to the launch of night tourism at Vidyadhar Ka Bagh (Garden) near Ghat Ki Guni, the tourism department will soon throw open other heritage attractions of city for tourists during night.

The government is all set to launch night tourism at Sisodia Rani Bagh (Garden) in Jaipur. Fountains and lights are being repaired and a garden is being developed to draw tourists.

The tourism department will also allow tourists to visit one of the palaces in the garden. Conservation work is underway for the project.

The department has issued tenders for the work. The project will cost around Rs 1.50 crore.

Officials said that the Sisodiya Rani Garden was earlier with Public Works Department, but the heritage features of the place including paint were tampered with. These features will be restored.

It will likely take a month to complete the conservation works and the garden may be thrown open for tourists by the end of July.

Tourism department officials said that they received a good response from domestic tourists to the night tourism at Vidyadhar Ka Bagh (Garden) near Ghat Ki Guni. It began on June 5. The 350-year-old garden is enthralling tourists with a palace sparkling in yellow and blue lights, a sophisticated water harvesting system in the two centuries old stepwell, lush green garden, plantation near walls and beautiful fountains.

The ticket price has been fixed at Rs 100 for domestic as well as foreign tourists.

Tourists are complaining that the ticket rates are exorbitant for domestic visitors. Vidhyadhar Ka Bagh is a major attraction because it is also a panther sighting point. Movement of panthers has been reported on the hills adjoining the garden.