The construction of complete 23 km long phase of Ajmer road to Tonk road will take more time and it is impossible to open it for vehicles in October. 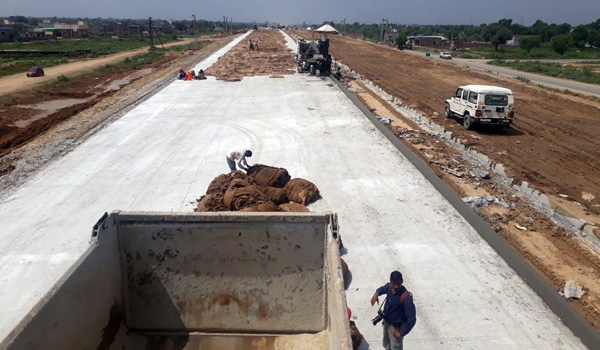 Jaipur: The National Highway Authority of India (NHAI) has turned down JDA’s request to complete the Ring Road project by October 8.

JDA proposed to NHAI officials that the construction work of 23 km-long stretch of Ring Road between Ajmer Road and Tonk Road be completed by October 8 so that it could be inaugurated before the model code of conduct comes into force. The NHAI officials rejected the proposal as it was not possible for them to meet this deadline.

It may now not be possible for the current BJP-led government to inaugurate the project.

According to NHAI officials, of the 23 km stretch of Ring Road between Tonk Road and Ajmer Road, the work on only 13 km stretch has been completed so far.

The delay happened due to the late permission given by JDA officials for the Nevta Bridge construction. The bridge’s width was also increased from 50 meters to 150 meters. All these affected the Ring Road project work progress and now it can’t be completed by October 8, added NHAI officials.

Project Director of NHAI Ajay Bishnoi was quoted as saying most of the work for Ring Road between Ajmer Road and Tonk Road is not complete. The project can’t be inaugurated by October 8. NHAI team has informed JDA officials about the progress. Also, the permission to start construction of the Nevta Bridge was not given on time.

The construction work of 47 km long Ring Road project was widely affected due to the heavy rains over the past few days in the city.

Subscribe to WhatsApp updates for Jaipur News Click on the following link(s) to find the latest & related stories on: Ring Road Project in Jaipur